If one would like to earn a badge of honor (or stupidity depending on your point of view) that consists of a red tattoo of an M with a circle on top, also known as the Iromman logo, one would need to swim 2.4 miles, bike 112 miles and top all of that off by running a full 26.2 miles all in one day. 16 hours, to be exact. It just so happens that there are real people out there that are crazy enough to do just that, and do it more than once!

Sunday, October 9, WSI members Kevin and Charles embarked on the Ironman journey in Louisville, Kentucky. This event had been in August in the past, moving to October to ease the midday heat for the athletes. For Charles, this would be his first time crossing the finish line after 140.6 miles. For Kevin, it was his last (so he says).

The morning was brisk. I (Nikki) opted for a coffee and a casual stroll to the swim exit while the racers lined up in a mile long line awaiting their turn to jump into the river one by one. Kevin made it out and hit the bike with Charles following shortly after. Although, when you are waiting for someone to come out of the water during a long swim it seems like an eternity, ask any spouse of an IM athlete.

The Louisville course was great for spectators! With 4 kids in tow we were able to see athletes at the swim exit, coming out of the transition on bike, twice on the bike route when looping through the quaint little town of Granger, again at the transition to the run, and finally at least twice along the run route which looped into town, teased the athletes with a view of the finish line, then made them turn left for another 13.1.

For Kevin, this IM was a goal setter. His goal was to be under 12 hours after completing the 2014 Louisville IM in 12:38. He quickly remembered how hard the race was. The swim was fun “if you like kicking and clawing at 2,700 people in a dirty river for 2.4 miles.” (Yeah, no thanks!) At least with it being in October, it was wetsuit legal this time. He completed his swim in 1:10.  He then made up time on the bike, averaging 19 mph. In fact, he flew by me so fast, the only picture I got of him was his back end. I am a professional spectator, mind you, and great at spotting riders from a distance, so he was really flying!

Being the smart rider that he is, he set his bike computer to monitor his cadence to make sure he spun easy through the rolling hills of Kentucky. Saving your legs for the run is extremely important. And of course, the run is where the pain starts. Kevin describes his marathon as the Frazz cartoon does. When Frazz is asked how he can run 26 miles at a time, he says he does not run 26 miles, he runs 1 mile 26 times.  He completed his marathon in a respectable 4:35, a whopping 30 minutes faster than in 2014!!! Crossing the finish at 11:57:07, in Downtown Louisville, with the music blaring, the street lights vibrant and the crowd cheering, Kevin Bridges, became an Ironman yet again, and accomplished his goal of under 12 hours.

For Charles, the goal was to finish. The amount of time put into training for an Ironman is no joke. Yet, it is so hard to determine a goal time as you NEVER know what is going to happen on the course. The swim was as expected, and the bike full of lovely Kentucky rolling hills that will take your legs if you aren’t careful. The run started off smooth. Around mile 10 his achilles wanted to make sure he knew it was there. It got louder (read more painful) as the run went on. His run slowed to a fast walk, in which I was biting my nails watching the clock and split times via IM updates. The run course was an out and back, twice, so we were only able to see him at the 13 mile mark and the finish. Those last 13 miles, for me, and I am sure for him, felt like forever. Knowing how hard he worked and knowing he was struggling was horrible. I, however, also knew how stubborn he was and that he would be crossing that finish no matter what. As the kids crashed at the finish, we waited anxiously for that moment of glory. The moment you see him appear in the finish chute and hear the announcer say those words; “Charles Elder, YOU are an IRONMAN!”. His first words to me after finishing, and I quote, “That was the dumbest thing I have ever done.” Ask him now, and he will tell you he is already planning for when he can do the next one. Really?!?!

There are even more badass people in our area! Another Battle Creek-er, Jason, joined in the festivities and coincidentally, a Trikat (from Kalamazoo) crossed the finish right behind Charles (which we did not realize until someone pointed it out in the picture)!

Congratulations to ALL of the Louisville Ironman finishers! I am not sure how accurate the statistic is, but they say you are now a part of the elite 1% of the population.

On Oct. 15th I did my first Peak 2 Peak race. I was totally surprised by such a great little race (800 racers) this was. Race started at the beautiful Crystal Mountain ski resort and finish at the resort! Post race celebration was awesome. The coerce was mostly flowing single track with VERY challenging hills near the end! The Fall colors were absolutely beautiful.  Definitely a race I will do again.

On Oct. 22nd  I did the Lowell 50 Gravel Road Race. Once again this was a great race, with a fairly large crowd. Weather was a little cool, but perfect for racing. The roads were in great condition. As always the hills were non stop and very challenging. It was great to see several WSI team members. Can wait to do it again in the spring!

Hope to see many WSI members at ICEMAN !!!! ~Dave

I have never done the fall Lowell race before but since I missed the spring version I thought I would do this one. This is a fun race-less crazy than Barry and the fall colors were amazing. The roads were in great shape and fast.  I raced the 50-54 age group for the first time and started in the back of the wave.  Took a bit to get through the initial throng of people but was able to weave through and ride with a small group.  With about 4 to go and left that group and finished 13th. Same time as last year (1.47) and had a great time. ~Danny

10k – I woke up Sunday feeling good so entered the Halloween hustle 10k in Marshall. First time for this one and it was a beautiful day.  I started with a small group of 4 and while it spread out we were all in sight of each other.  I felt good and starting catching a few people and with about 2 to go ended up running with a cross country kid from Marshall. I would pull ahead and then he would.  With about 200 yards to go, I pushed the pace a bit and figured I could beat him but then he unleashed a pretty fast sprint and I could not answer.  Got second and close to my PR (41 minutes).

Racing the sunset in barry county with friends and teammates.

Flat trails, quick turns, teeth rattling slick roots and one ball buster of a climb.  We are talking bleeding out your eyes, ears popping from pressure switch back climb.

While standing in line with 30+ fat bikers I watched Jeff’s group be counted down from ten seconds, and like being shot out of a cannon I watched his WSI jersey disappear into the woods.  The start looked painfully fast so I made sure I scooted up real close to the timing mat before gunning it for the hole shot.

The announcer (Grand Rapids Single Speed Legend Jeff Jacobi) called “ten seconds to start” and the next thing I know I was raging third wheel into a tight sandy turn hearing only the deafening sound of 4 inch knobby tires around me and the sound of my own near death asthma attack wheezing.

Two laps at 12 miles each was on the menu for today’s pay to play excursion.  My neighbor and training partner Nick and I worked together for the first lap sitting third and fourth keeping the top guys in site.  My plan was to deliver him to the base of the big climb and I would hang on if I could.

Lap 2 was faster without all the traffic.  I lost Nick up the big hill but he was still in the crosshairs as I was now sitting fourth, with the third place guy picking all the good lines for me.  He had a beard so I trusted his judgement. 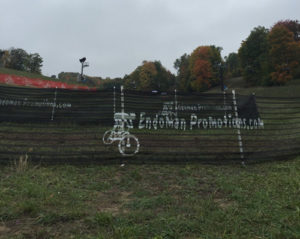 I held the wheel to the base of the hill with Nick long gone battling for the top spot.  The 5th place fat biker came from out of nowhere making a move up the hill and the guy in front of me giving chase.  My gas tank was empty and I could not match it.  Now sitting 5th, I was alone to work my way up the kill hill.  When I came around a blind corner I heard the announcer say “We have a fat tire race on our hands” and I saw the 3rd and 4th place riders cresting the hill and dropping into the single track descent to the finish.  I dropped two gears and stood up giving it what I had left which wasn’t much.

“Focus, No mistakes, focus, no mistakes, focus” was what I said to myself as I decided to take some risks on the decent hoping to pull the two riders back.  As I railed around a sweeping turn I came up on the 4th place rider wrapped up in some trees on the side of the trail.  I made my way around his wreckage and didn’t touch the brakes again until the finish line.  4th place finish, with my neighbor on the podium in 2nd and Jeff finishing 10th in the Sport category.

A great day of racing with special thanks given to WSI Cycling, The Trek Store of Battle Creek and Velocity USA.