Saturday, December 13th the weather was drastically different than a year ago. This time last year, we were experiencing our first major snowfall, pounding the streets of Battle Creek from sun up until sundown. This year it was low 40s with a light, misty drizzle. Perfect conditions for a run!

WSI Cycling riders were told to show up festive and bright. They didn’t disappoint. Bikes were decked out in lights, tinsel and wreaths, and even accompanied by the guy in the red suit, himself! The Tinsel Toes 5k is a family fun run through the Festival of Lights in Downtown Battle Creek.

The event raised almost $9,000 for the local Girls on the Run chapter this year. WSI Cycling were seen leading out the over 350 runners and they did it in style. Some team members opted for running instead, donning their best ugly Christmas sweaters and reindeer hats all in line with the race theme “where the ugly Christmas sweater and running shoes unite”.

Thanks again, WSI Cycling riders, for supporting and leading out local races. It sure does give a race director an added comfort knowing they have you on the course for the runners!

Team Active represents all that is good in cycling. First time cyclists arrive with their old bikes at the Team Active store for a Monday night ride wearing running shorts and tennis shoes and are welcomed to a group ride by friendly cycling enthusiasts. Everyone wearing a WSI/Team Active jersey shares tips for keeping up, staying warm, and improving performance. These are things that I rarely see shared with strangers on other rides (and I have ridden with several groups nationwide.) I was one of those first time cyclists in 2007 and Team Active made me feel at home and showed me that, with proper training, anyone can safely race!

I am 52 years old and as the years go by, it is more and more important that I spend time doing things that represent my personal values. It is not that I am worried about what kind of legacy I would leave (I suspect those thoughts will start to enter my mind when I consider retirement—which I do not expect to do until I am 90!), rather, it is looking at what I value and wanting to do those things better and better. To me, this means trying to find time to carve out of the week for family, spending a little more time at the office to prep for the next day’s meetings, giving back, and doing things that I know my WSI/Team Active teammates do every day. I know my they do these things everyday, because that is what drew me to Team Active and WSI/Team Active Racing nearly 9 years ago. In the last 5 years of racing, I have finished 8th in the Iceman, 3rd in my age group 3 times in the Tailwind MTB Race Series and have ‘flown the Team Active Flag’ several times from the podium. I did countless CX, MTB, Road and Criterium races but over the last 2 years, those trips to the podium have become less and less frequent…and this bothers me.

As you all know, the race does not show people how good you are, the race is a demonstration of the training and discipline you were able to adhere to during the time between races. Looking at my performances, it is clear that I need to change something, because I value the lifestyle and healthy living that bike racing represents. Eating a bag of chips and sitting on the couch 5 days a week does not represent lifestyles of the majority of high performing cyclists. (Those of you who can eat whatever you want, train on the ‘nice days’ and show up to finish in the top 10 make me jealous….you know who you are!) I also need training buddies who expect to meet me at a certain time and a certain place to ride, because I will show up to ride if you expect to see me. That is was Team Active provided for me for many years. 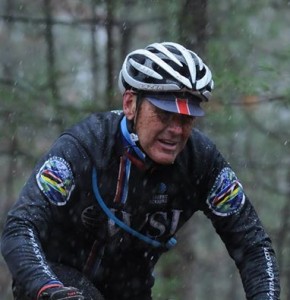 The word training has, no doubt, been a theme in this final WSI/Team Active race report. It has indeed been the thing on my mind nearly all season. It Is not that I have not had time to train, it is that I did not take the time to find people to ride with between races, and as such, I did not train nearly as much as I know was necessary this race season. Training was certainly on my mind prior to the start of that icy rainy November day. I went into the 2014 Iceman MTB Race knowing that I would suffer on the hills and feel that the finish line would never come—and would hope to hang on in the snow and rain for less than 3 hours to get the final race off the books AND raise $3,000 for the Michigan Alzheimer’s Disease Center. Prophetically, I put my chain brush in my jersey and cast aside my glasses, knowing that mud and sand was my enemy—I lined up for my wave, clipped in and started to spin.

That is what a friend and fellow racer texted me after the race. Miserable, was what I said to my dad at least 10 times while I was shivering into dry clothes from the tent. I had actually expected that the muddy conditions might have been an equalizer for my lack of training. What I had not counted on was the fact that I had exactly the wrong tires on my bike. The Kenda’s that I have been training on with my full suspension bike would have been perfect, but I had not even though about changing tires on my Super Fly that I was using during the race…big mistake. Our wave ‘13’ departed in the rain at 9:36 am and entered the course without incident. The sand was a bit loose, but typical for being that far back in the Iceman (over 1,000 participants were already on course by the time I hit the woods.) But as soon as we hit the single track, the sand changed to mud and I immediately realized that the tires I had might just as well have been racing slicks.

First tight turn and I went straight into a tree. I had no control of my bike. So I slowed down, but I would start to speed up again or drop down a hill and again go straight into the woods. I fell a half dozen times, wrapped a sapling in my cassette which caused some significant drive train issues for the last half of the race. I hit a tree so hard that I bruised the heel of my left hand as I tried to fend off the tree. I figured I was done when I could not keep my chain on my the drive train, but I stopped twice and spent several minutes brushing the sand out of my chain, finessed the cassette to a bigger gear and was able to muscle up the shorter hills. The sand finally cleared and I was able to spin up the more notorious hills like Anita’s Hill.

Miserable. I watched the timer on my Garmin go past 2 hours and was still a long way from the finish, I knew this would be one of the slowest Iceman finishes I would ever post. In the back of my mind were two things; I was raising money for the Michigan Alzheimer’s Disease Center and I was not going to DNF. I hate the feeling of DNFs and to DNF in my last race wearing the WSI jersey would be the worst! So I pressed on. My finishing time was 3:32! Horribly slow. I cannot blame it all on the equipment, clearly my training was not up to par, but I am a pretty cautious rider and going into the woods several times would have slowed me down even if I was at the peak of my fitness. Regardless, the race was over. The season was over. I retired my WSI/Team Active jersey after raising $4,000 for the Michigan Alzheimer’s Disease Center knowing that I gave everything I had on that miserable day.

And now, I am sad to say that it is time for me to find a local team of people to train with here in Ann Arbor area so I can leave work and be on the trail within a half hour or so…peer pressure is the key for my training. Team Active’s awesome sponsorship through Mike Wood and the team coaches (former coach) Angela, Danny, and our huge sponsor/coach Eric and WSI have meant a lot to me and I know I will see you all at the races next season—hopefully I will be fitter and faster. Go WSI/Team Active Forever!

With the most sincere gratitude,
Jack Miner