Today I expanded my cycling resume to officially include “cyclocross racing” to the list. While I’ve owned a cyclocross bike for several years, up until today most of what I’ve used it for has been riding the spring roads here in Michigan (which makes me much more confident with all the potholes).  Besides, what other sport can you do where prizes include six-packs of beer and everyone (who’s of age, of course) can grab a cold one after racing?!

I did the Kisscross Masters “B” race at Markin Glenn Park in Kalamazoo, which means I had 45 minutes of racing ahead of me. I initially thought about doing the “C” race for 30 minutes, but for the $25 entry fee, figured I’d at leasts get another 15 minutes of exercise. We took off at noon with a good group of other racers. I had done a couple of pre-race laps to get a handle on the course and true to cyclocross races, there were two sections on the course which required a dismount. The first section involved three foot-high barriers and with some tips from Andy at Team Active the week before, was able to negotiate them without any problems. It’s amazing how much easier it is to dismount and then run with your bike when you actually un-clip from your pedals!

The second area that required a dismount (and run) was just after a section that took riders along the water’s edge (yes, that means SAND!), and while riding parallel to the water was not much of a challenge, headed back up to the course involved 10-15 feet of wet and soft sand – impossible to ride. Even the “A” racers all walked up this section. More about the sand later.

Each of the laps was about 1.25 miles, but as is the case with cyclocross you race for a set amount of time, so the number of laps you end up doing really depend on how fast the leaders are riding. At 30 minutes (which is the time of the “C” race – and the race I was planning on doing, until I got there and signed up) I was glad that I had 15 minutes left (and not the full “A” race of 60 minutes).

Completing my final lap, I successfully managed to run over the three barriers, climb the big hill at the back of the loop, successfully navigated “the ditch” and had one more trip to the beach before crossing the line. I made the hairpin turn to the left and headed into the sand, and while each of my previous entrances were smooth, this time I caught a deep rut left by another bike and it got me off track. The sudden stop caused my chain to come off, get wrapped up in my rear cog and then I heard the SNAP!

Crap, I broke my chain but the good news was that I had made it to the home stretch. This (of course) was also the most populated spectator section, so when everyone realized why I was carrying my bike and running the rest of the couse, the cowbells and cheers seemed to continue to increase. I got passed by several other riders, but at this point it didn’t really matter. I just wanted to finish, and that mission was accomplished.

As I enjoyed my “post-race” beer and watched the “A” group race, I couldn’t help but think about my first mountain bike race, which must have been 1989 or 1990. Similar to my finish today, I suffered a mechanical at the end of the race, but unlike today, figured that if my bike was broke I was done. But, luckily I had a buddy yell “RUN, you’re almost there” and ended up finishing my first mountain bike race carrying my bike.

Since then I’ve lost count of how many mountain bike races I’ve done, but that one finish always sticks in my mind. Today’s no exception and what a great way to kick off my cyclocross efforts.

the ICEMAN is as much an event as it is a race.  Preparing for it is like the excitement of a year-end race party while being anxious about more than 4, price 000 cyclists in a race.  For me, it was hard not to complain in October about being sick and not being able to train the way I knew I should, but there are so many guys who are fighting so much tougher illnesses and broken bones, I opted to just keep it to myself (and my loving wife who tolerates me).

Pre-riding the last third of the race has become a key part of this race preparation.  The race organizers seem to find pleasure in having a “pseudo” finish with a mile or two left or crazy choke points in the chute that make things interesting after having turned yourself inside out for a couple hours.  On Friday, I rode from Williamsburg road to the finish and found each of Anita’s Hill and Cassies Cliff to be manageable if I stayed off the oak leaves.  There was no traction in the oak leaves in the middle of the 20 percent grade at the top of Anita’s Hill (good lesson for Saturday).  My dad was helping me by dragging me around the county as I did the obligatory package pick up, pre-race prep and other things that make me hard to be around.  But all was good, an easy Friday Prep, the Fuel EX was running great, full suspension (which is not necessary for this race) was topped off and ocked out…I was ready for a fitful night’s sleep.

Listening to the radio on Saturday on the way to Kalkaska, the radio guy said there was 1 ½”  of snow on the ground in Acme, right in the 30 mile path of our ride between Kalkaska and Traverse City.  I recalled a previous ICEMAN where the trail conditions transitioned from an ice rink in Kalkaska to wheel grabbing mud in Timber Ridge, turned out that the finishing conditions were going to be replicated this year.

The race started well, I moved up from mid-front to front 10 after the first hard left turn which guides us out to the trail between the middle school and the Hockey Arena.  Wanting to keep my heart rate well below threshold for the first half of the race (with training well below what it should have been, I wanted to pace myself for the last half of the race) but still wanting to be in position to stay away from the guys who cannot handle the sand well in the first couple of hills, I stayed toward the front.

Guys who clearly were over-confident or under-experienced, went into the oak leaves to pass and were falling down regularly.  In the first 10 miles, I heard more than a half dozen guys go down behind me and maybe the same number fell in front of me.  I actually rode over the back tire of a guy who fell in front of me on some single track.  I was feeling good going into Williamsburg road hill, my dad with his customary goose call rooting me on and good friend Patrick and Cristen yelling at me to get my “fat ass up the hill”.  It made me laugh, and I felt good with about 17 k to go.

My goal was to average 20 minute 5 mile ‘sections’, the first was 18, the second well over 20 and the third was also over 20 minutes.  I was starting to feel the affects of not having put in big efforts in October.  After passing Williamsburg road, it was a different race.  Tactically, I had handled the race exactly how I wanted, and was taking advantage of the big descents that accompany the climbs.  I am not sure what happened during one of the descents, I suspect that I just kicked up a lot of mud into my drive train and I ended up losing access to my small ring and half of my middle ring, climbing became an impossible task.

Anyone who has ridden these hills knows that it is much easier on your legs to spin up in your granny gear than to run up off of your bike…your quads, calves and ham strings just scream when you are off the bike.  Spinning up was no longer an option for me, the chain just wrapped around the middle ring every time I tried to call for the small ring…SUCKED!

I was much more upset about the training that lead up to the race than the race itself, I feel like I handled the course well and, except for being at a full stop between 24 and 26 k (off the bike stopped!  Though I had heard of this, it had never happened to me before…miserable).  After the race, I found that my rear derailleur was bent, I have no idea how it happened, but it compounded the gritty drive train issues, for sure.  At the finish, there was nothing left of me—at all.  By the time I found my dad and my change of clothes, I was feeling sick to my stomach, something that took 45 minutes to go away.

The race was a very hard effort for me and I was very disappointed in my results, it turns out, however, that my results were on par with what they were last year.  I finished 30 out of 92 with a time just over 2:30 (10 minutes slower than last year.)

It is a great sport, I finish this ‘last race’ every year and by the time the beer is gone, I am looking forward to next year’s races and training over the winter.  Thanks as always to Team Active and WSI for sponsoring the team—it was great to see a bunch of TAR Teamies at the finish.  Have a good winter…see you at the end of winter party. 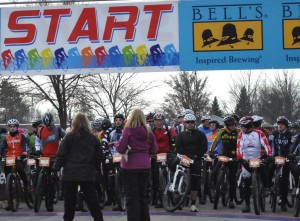 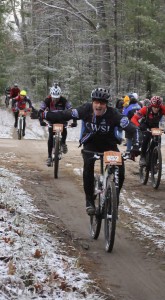 I was seeded in the 7th wave going off at 9:18. With the combined early start time, seeded wave, and weather forecast I was confident for a 2hr or under finish. Watching racers arrive at the start area with snow on their vehicles started to deflate my hopes, the weather man got this one wrong. I second guessed my tire set up and pressure hearing of mushy muddy conditions in the last half of the course.

Well no changing anything now I’ll just make the best of what I had set up. I got a good start, pace lining with the top ten in my wave through the first 4-5 miles I then settled into my pace. I had caught a group of 20-30 riders bunched up on the new single track section even coming to a complete stop which was probably the worst hold up of the whole race. In all I think this was one of my funniest.

The trail conditions on the single track really brought out the skill in racers, with the leaves being dry and slick in Kalkaska, to picking the fast line in the sand during the middle half, to using the leaves for traction in the muddy sections at the end.