Crossing the finish line on October 10th marked the finish of a very big accomplishment for me. I was down in Virginia competing at the USA Ultra Tri race. The event was the Quadruple Ironman distance. I was successful in the completion of 4 Iron distance triathlons in 4 days. (2.4mile swim, 112mile bike, 26.2mile run x 4) It was great training for RAAM 2015 and my return to the 3,000 race across the U.S. The pictures are of me at the start of the swim and the finish of the race. When you finish you get the pleasure of striking an anvil the number of times of completing the ironman distance. 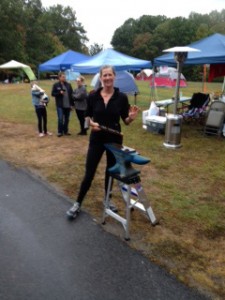 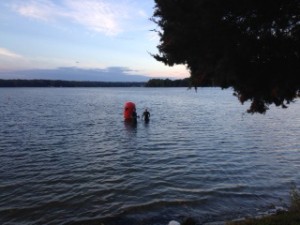 Doing these ultra distances races validates the importance of family, support and how crucial they are to the success of the athletes. If I didn’t feel the support of those around me, I would not be able to bring myself to the level of physical and emotional challenge needed to continue. There is a symbiotic relationship that drives the athletes to keep going when things get really tough. An example of this occurred during the last 4th day of racing. A fellow competitor tripped and fell in front of me from exhaustion. I ran to help assist him and he said “Go ahead I am alright”. I replied with a smile, “No man gets left behind” and stayed to help him and wait for medical. Any of us out there would have done the same thing. 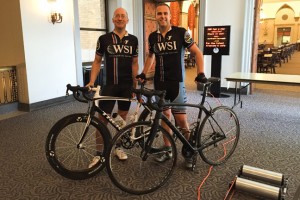 Josh & Devin here; 2014 marks another year in which we rode rollers indoors for charity.  Six to seven years ago, Devin came up with the idea to ride rollers for the United Way as a way to raise money for those less fortunate.  Two years in, I decided to join him and we’ve been doing this event together every year since.

The concept includes riding on rollers over four hours with the challenge of making it to 100 miles.  That requires a minimum of 25mph avg.  It’s worth saying that there is less rolling resistance on rollers so that avg is more attainable but I would challenge anyone to try this and picture themselves staying on for that long.  It’s not fun, to say the least. 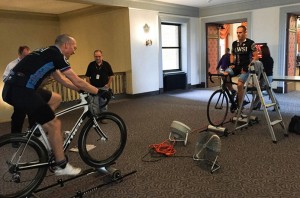 With the new team requirement of raising charity dollars, this was the perfect ride for Devin.  Having already brought in $1600 from my Big Day in May, I didn’t need to ride but chose to join my partner and mentor in riding to keep him company.

Devin set a new personal goal this year by hitting 100 miles in only three hours, 14 minutes with a 31mph avg.  That is absolutely cookin’ and my hats off to Devin, probably one of the best road riders on our team.  I hit 100 miles in three hours and 50 minutes with a 26mph avg.  Most importantly, we brought in $600 for charity ($300 each) and ended yet another team ride with smiles on our faces.

Sunday, ranging between 15 and 100 miles. I chose the 62 mile route (metric century or 100 Kilometers) to accomplish my fundraising goal for the year. With the help and camaraderie of WSI team mates, Team Active employees, and loyal Team Active customers I was able to stay on task and complete the 62 mile route. I raised over $400 in donations to support CityLinc ministries here in Battle Creek so they can continue to provide licensing services for foster care

Thanks to all our sponsors!

I never figured myself to be the type of guy to do an obstacle course but it is also rare for me to turn down requests from friends either. I was recently asked by a family friend to compete in the BattleFrog Pittsburgh OCR. What is BattleFrog? Well, this is direct from their site “To challenge even the most rigorous obstacle course / mud races in the market today, former Navy SEALs have launched BattleFrog , the most adventure-packed, 15K, 5K or 1K obstacle course race (OCR) series in the history of the sport. The race raises money for the Navy SEAL Foundation, the Navy SEAL Museum and Memorial and the Trident House, underscoring BattleFrogs commitment to memory, legacy and family. The obstacle course challenges are inspired by BUD/S (Basic Underwater Demolition/SEAL) Training.” So, for my first ever OCR, I decided to go BIG and tackle the BattleFrog Pittsburgh 15k!

BattleFrog Pittsburgh was held at Mines and Meadows in Wampum, PA on Sept 27th. The Pittsburgh event was the first time that a mine was included in the OCR series! Tim Castleberry, Chris Gillette and I did the event as a team as part of a birthday adventure for Tim. The course was 9 miles of over 20-plus obstacles with plenty of hills and switchbacks that kept us out there for hours (just under 4). We could not have asked for a better weekend….road trip with lots of laughs, beer and a very challenging obstacle course!

Our wave went out at 8:30 a.m. but it was the events leading up to the start that really put the event into perspective. A ceremony honoring fallen SEALS really made an impression and, for me personally, made me thankful to have people willing to put their lives on the line to protect the freedoms we enjoy in our GREAT country! I am truly in awe of the feats that our armed forces men and women are able to accomplish and I was proud to honor them in a small way through the event (and challenge myself at the same time).

After a mini boot camp of jumping jacks and push-up’s complete with unison counts (or having to start the push-ups again) we were given the command to scale the wooden fence to the starting corral and prepare for the start. The race director made it clear that the goal in the open division was to work as a team and help out the fellow racers (unlike the Elite racers who had left the chutes before us). Being part of a team is something that puts me at ease so I was able to get my mind and nerves settled and really enjoy the start!

Two explosions marked the start of the race and the herd of runners maneuvered down a bed of rocks and into a field to hurdle a 4 foot wall, followed by another wooden wall with a picture window opening and finally into our first of many mud pits. Runners began losing shoes and I was thankful our team from Battle Creek had made it through without any issues. The next phase was onto a creek bed run. The water was just over my toes so my feet were numb pretty quickly into the run. The creek run was fun as it forced you to constantly evaluate the terrain, scanning for rocks, roots and anything that was going to have you face planted.

One of my fears going into the event was how I would handle the climbing obstacles. Coming out of the creek bed, we hit the first wall built of 2×6 boards, forcing the participants to climb up one side flip the legs up over the top and climb back down. Thankfully, I did not have time to think and I was able to get up and over without issue. The next set of hurdle walls I had to rely on my teammates for boosts to get up and over but I was determined to get through as many obstacles as I could! I really felt a sense of accomplishment as I was able to scale all of the cargo net obstacles and the A-frame climbing obstacle without hesitation or assistance. When I bellowed my first Hoorah! After the A-frame obstacle I heard a man behind me say “I am glad to see that there are civilians out hear that get the meaning behind Hoorah!”. Turns out that man was a former Navy SEAL who had broken his back and was told he would never walk again. What an inspiration! The man still had little strength in his left arm but there was absolutely no quit in the man. After seeing and talking to the man on the course, I had no issue attempting the 12 ft. wall climb. I still cannot believe that I got myself up and over that thing!

When we reached the mines portion of the event we were roughly 3 miles in. I thought it was so cool when they started handing everyone a head lamp to enter. The temperature immediately dropped when we got into the mine and I just tilted the head lamp down toward the ground and started jogging. We had one climbing wall to traverse but the rest was just natural rolling hills and terrain….until we hit the water. All participants were told to grab an intertube and hit the water. Someone said the water was 49 degrees and I don’t think they were lying. Once I hit the water, I remember telling myself to breathe as the shock just made people lose their breath. We were able to wade through the water for a bit but it eventually dropped off to over 8 ft. so it was time to get on the tube and start paddling for the other side. The picture below is me post water turning in my tube.

I only bypassed 2-3 obstacles on the course which was better than I thought I would do given the short amount of time we had put into training. I had some comical dismounts throughout the day, falling backwards off a cargo net, slamming my head off the backside of an inverted wall and getting my leg caught in a wire robe ladder that are still being joked about by my team. The event really made me push myself, both mentally and physically. I did things I never really thought I would/could do and it also really hammered home the power of working as a team. Below are a few more photos from the event. This event taught me so much about respect…for our military, for myself and for my team. I just can’t say enough great things about BattleFrog! 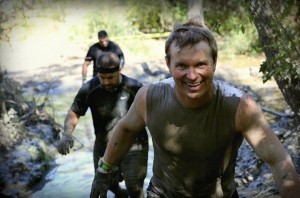 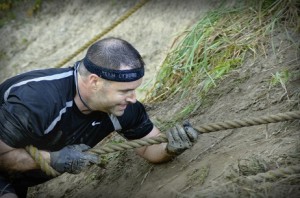 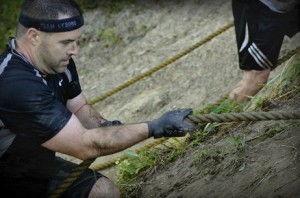 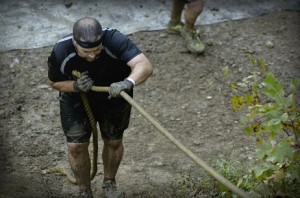 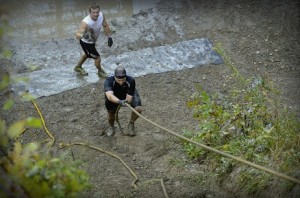 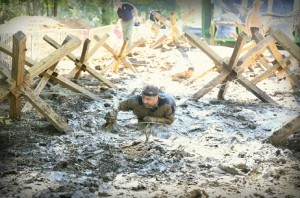 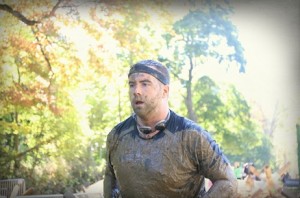