We headed to Iowa for a three consecutive criteriums in three days. The first of which was the Snake 20 percent grade cobbled climb that challenges any rider. After the 100 feet of climbing it was a gradual decent into sharp corners of downtown Burlington, Iowa. The junior race was first, 45 of the best junior riders in the mid-west and a few more. I had a poor start, and entered snake ally near the tail end of the field. Given that this is a very unique race, there was a very unique way of racing it. You would climb snake ally at your own pace, descend alone. And if you were lucky you would get so sit on someone’s wheel on the flat portion of the course. By the end of the race I moved up to 18th place. I had no idea what to expect. I was happy with the result.

The cat 4 race was later the day. I got a really good start and kept myself in the front. Out of the forty-some riders to start, only five were together with two laps to go. The last time up the climb a junior got a few bike lengths ahead of me as we crested the top. The gap stayed as we went on the decent, I went for a “don’t lose it here” approach. The junior pressed on and grew his gap on the decent. I tried to close the gap and thought I was going to have plenty of time and road to play with. On the final stretch he held his gap and crossed the line a few bike lengths ahead of me. I headed to the podium for my though to be second place but I was told that the winner was disqualified for not reporting to junior roll-out, therefore, I was awarded as the winner. To be completely honest, in my mind, I don’t consider this as a win. Although I received the plush snake, brick, upgrade points and $75, which was nice. I’m very happy with the way I rode the race. It looked like a great start to a long weekend of racing. 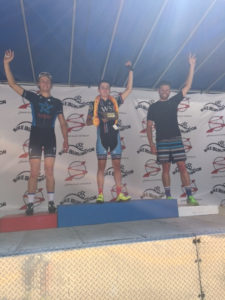 The next day was the Melon City criterium. A crit that featured a longer steady climb, with a fast decent and a speed bump that acted as a ramp. Going down at 40 miles per hour you would hit the “ramp” and jump a hand full on inches off the ground and land on skinny tires, because normal crits aren’t dangerous enough. The junior race stared in the morning. The same riders as the day before joined me on the start line just 24 hours earlier. For the first few laps I stayed with the group but eventfully I saw my self in the second group. We hung behind the lead group while a few of the best kids in the country went off the front. I managed to be the first finisher out of the second group and snagged 18th place yet again. I was happy with the result.

The cat four race later that day had some bigger names. It stared hard and fast. There was a few crashes that I was almost caught up in. one guy fell over and landed on my hip and his head ran down my leg eventually hitting the ground. It happened fast, but I was focused, and in control and his crash didn’t slow me down. On the last time up the climb I managed to get fourth wheel going into the last turn. I held onto it until the finish. I was happy with my result considering how hard the race was.

The third and final day was the Quad City criterium in Davenport, Iowa. This course had a steep hill and a fast decent along with two tricky corners before the finishing straight. I woke up with a cold. I tried my best to not let it effect my mind before it effected my legs. I didn’t say anything about it out loud before the race because I knew if I did I would have lost any chance of a good result. I wanted a top 15. The race started hard, not a surprise. Again I found myself in the second group suffering. I managed to get 26th is the race. I was disappointed. But hey, one bad result out of a six race weekend, that’s not too bad.

In the time before the cat 4 race I wasn’t feeling great. I was not my best with my cold. But I knew I came here to do something and I had a job to do. So I started the cat 4 race and stayed with the lead group until two laps to go. Then a small group formed. I lead the decent for the group and two riders came around me on the finishing straight a I got ninth place. I was okay with the result given the circumstances. Overall I was happy with the results I got in Iowa and I really enjoyed the courses, because theirs nothing like getting to your max heart rate every two minutes.

I raced the Snake Alley, Melon City, and Quad Cities Criterium in Iowa on Memorial Day weekend. All three of these races had a lot of climbing and technical down hills. The climbs and the high level of riders caused the weaker riders like me to separate from the field very quickly. My finishes were towards the back, but considering the level of competition and the difficult venue I am glad I raced these events. Hopefully my next race will seem easy.