***Devin and Josh rocketing around a lap at the Willow TT

Devin Winton’s Willow TT: The Willow Time Trial has been a baseline for winter fitness and race season preparation. Because it is like Forrest Gump’s box of chocolates, you never now what you’re going to get. It could be bright, sunny, and in the 60s or cloudy overcast and in the 30s. Saturday, April 25 was cloudy, overcast, and in the 40s.

I arrived to the race venue a bit later than anticipated, which meant that I got about a ten minute warm-up before reporting to the start. Without a dedicated time trial bike, my goal is to settle in to a good rhythm and suffer. Six laps and it would be over.

The most significant change this year was using a compact crank. Using the compact allowed me to settle into a big ring gear that was comfortable and maintainable. I used two primary gears: one going into the wind, and one with the wind. Did I mention the wind? That’s one thing you can always count on at Willow – the wind!

After six laps of controlled pain, I finished in just under 35 minutes; about where I’ve been the past two times I’ve raced Willow.
Enjoyed riding with teammates Dan Wolin, Josh Haas, and Matt Wright. Thanks to our sponsors for making the race team possible!

Danny Wolin’s Willow TT: Ah Willow. I love it and hate it. The Willow TT is never the same race due to weather and wind conditions.  The last two years it was warmer and a bit windier but my times were faster than this year.  From 2nd the last two years to 5th and about 45 seconds slower than last year.  Still averaged over 25 but I was hoping to be in the same range as I have been.

Not really sure what happened this year but it was colder at the start which made warming up more difficult and the wind, while not horrible was more variable.  Usually a good tail wind is available for at least half the course but not so much this year.  Training has gone well so I will chalk this up to an off day. I think I am still where I need to be but will be tweaking some things.

Matt Wright’s Willow TT: This was my second year competing at Willow. The weather was decent: partly sunny, 45 degrees, and only moderate wind. I raced the Eddy Mercks Category this time since I no longer own a TT bike. I placed a little better in this category finishing 12th out of 18 riders with a time of 39:00:02. I averaged 20.3 MPH. I felt pretty good about the race and look forward to competing again soon!

Josh Haas’ Willow TT: My 2nd year at Willow is in the books.  My goal was to improve my time from last year.  Technically I did that, but only by seven seconds so it wasn’t the window of improvement I was hoping for.  But I still felt pretty fast and averaged 23.5mph which I’m pleased with for the end of April.

but perfect conditions for runners. The Overall 10k winner, Matt Santner, was very appreciative of the lead outs helping him to keep a steady pace. Katie Bridges manned a water and spirit station with Rose and her Girls on the Run team. 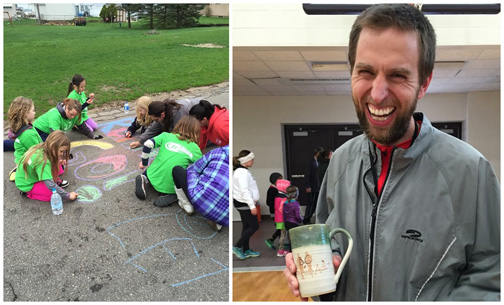 The weather cooperated and it was a beautiful day to race at the Yankee Springs Time Trials! Once again, WSI had a number of riders participating in a variety of events. The Bridges family had a successful day of racing with Kevin setting an under 1 hour PR and both Marie and Scott placed second in their AG. Dwight raced single speed fat tire and placed 8th, claiming Dan stole his 7th place thunder. Dan finished with a time of 54:47 and Dwight was 55 and some change. A little friendly team competition never hurt anyone, right guys? For Dan, the race holds a bit of a sentimental value as well. The Yankee Springs TT was his first real mountain bike race back in 1999. He loved it and hated it all at the same time. The love must have won out though, because he is still at it 16 years later. For others, the race was a humbling experience. Both JJ and Matt were back at after a hiatus. JJ was discouraged by the over 90 minute finish time but knows it takes more hard work and practice to see the pay off. Matt was not expecting anything great after being off the bike for 5 years. He did, however, experience some excitement when he came across a rider laying in the middle of the course with a stitch-worthy gash on his forehead. Of course the riders first response upon encountering Matt was “Is it bad enough that I need to stop riding?” After getting first aid assistance for the other rider, Matt was off again to finish the ride.

For great pictures of this year’s Yankee Spring TT make sure to check out the gallery by Jack Kunnen.

The Lowell 50 is a classic gravel road race that covers the countryside of Lowell, Michigan including a unique covered bridge. It offers both a 34 mile and 57 mile option. The event took place on Saturday, April 11th and WSI was well represented by Andy, Paddi, Danny and the Bridges family.

Kevin was the only brave sole to tackle the 57 mile challenge hoping that he would have logged some miles by this point in the race season. Mysteriously throughout the looped course he always seemed to be encountering a head-wind. After he split with the 37 mile course it became flat (still windy) farmland and he partnered up with another rider, who coincidentally was an Ironman as well. His realization of the day: the bike was great, the motor still needs some work!

Paddi, racing single speed, enjoyed her ride alongside Andy. She came in 9th overall for the women although the results grouped her with the men since she was the ONLY FEMALE SINGLE SPEED! Rock on, Paddi! Their biggest excitement of the day was a fat tire blowout right next to them that had them thinking they were being shot at.

Both Katie and Scott placed 4th in their age group. It must run in the family. Whether the ride was windy or not, Katie was going to enjoy it. She had a brand new pink ride from Team Active! Scott is working his way up the ranking in racing this year and is enjoying the learning moments. For this particular race he experienced working with a pack of riders as a team to push each other through.

Danny improved his time from last year by 20 minutes, finishing with a time of 1:46 and taking 7th in his age group. There are some wicked fast riders in that group!

All-in-all it was a beautiful, sunny, WINDY day for a race! 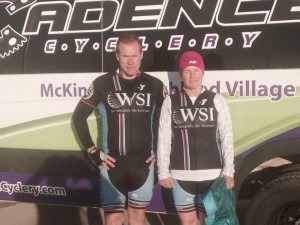 On Saturday,  April 4th Paddi and Andy traveled to Muenster, Texas to partake in the Red River Riot bike race. It was a rather chilly start but managed to warm into a beautifully sunny day with cool winds coming out of the north. As the day progressed, the winds from the south picked up. Everyone riding had to do the first lap which consisted of 33 miles and included the feared Windmill Hill. In comparison, Windmill Hill would be equal to all Three Sisters (from Barry-Roubaix) combined! This was Paddi’s second time at this race and she successfully made it all the way to the top. Andy rode his single speed for only the second time racing and did splendid! With a super fast first lap, both decided to head back out for the next segment which would include 45 miles with even bigger and more challenging hills! In their two-wheeled travels they encountered a coyote along with some breathtaking scenery. They completed the ride in just over 5 hours. The Texas hospitality was great and the event concluded with some home cooked BBQ pulled oRk that was out of this world delicious!