Michigan weather, May 1, you never know what you are going to get! The Fort Custer Stampede is a local favorite for obvious reasons, including the fact that it’s home turf! As opposed to the beautiful temps and sunshine that the race offered last year, this year brought cold, drizzle and more cold. WSI was in charge of the grill again and served up 300+ burgers and 400+ hot dogs provided by Team Active. Check out how our WSI members did this year. 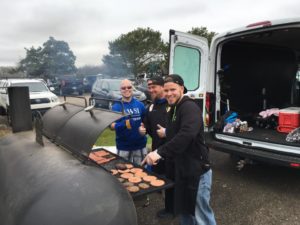 I was surprised how fast the course was despite the rain we got on Saturday. The trail was fast. The first lap through the reverse amusement park was another thing. There was a huge line of enraged racers waiting for slow fat bikers to clear the way. There was a couple of times where very slow fat bikers refused to allow passing much less communicate with the traffic jam they were creating. I am confused as to why they had the beginner/sport fat bike races lead the sport waves. I am sure the beginner racers were pretty turned off to racing after that.
Back to the race: After the traffic cleared, I felt pretty good through the rest of lap 1. There was a couple of close crashes but I stayed upright. Going into lap 2, I found myself alone most of the time passing occasionally and being passed occasionally. Having no group to work with, I found my second lap was considerably slower. I am pleased with my result and look forward to training on the trails as the weather becomes more agreeable.

Raced Stampede on Sunday and did better than I thought I would! The course was nicely packed and dried by the Expert and Elite racers. Weather was chilly until the pedaling began. I raced Sport single speed and placed third with a time of 1:29:02 and I think that’s a PR for me! Not too bad for no real mileage this year. Let that be a lesson to y’all, rest is as important as the ride!

Peyton, the youngest WSI member to ride at the Stampede, rode the beginner’s course for his second year in a row. Finishing about 8 minutes quicker than the previous year, he had a blast and is looking forward to more. 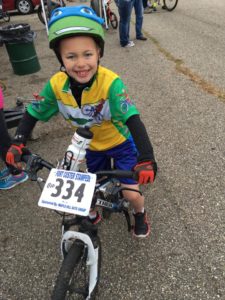 Now, the question of the day for the race. Did I have fun? Yes and no. I tried to go easier on the first lap, knowing it was a lot of miles but found myself upfront with a small gap. I tried to keep my speed reasonable to keep them close and yet still have fun in the technical sections. Leading into the second lap and feeling the legs start to get crampy, I knew it was just a matter of time before someone caught me. I tried to purposely not look back at this point and j…ust tried to enjoy the course and keep my breathing under control. Then it was just trying to control the cramps. And not thinking too much of the riders behind (one already passed me) kept the nerves down which kept the pedaling under better control (this was a first).
Interesting. I can say I had a bit more fun because I was more calm and laughed at myself.
Not fun is apparently that I have no middle ground and ride myself into the ground no matter what.

First year on the team. First mountain bike race ever. 4th place in her age group. Enough said. Way to rock it, Jacque! 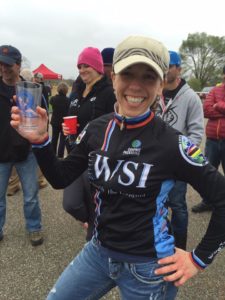 While Cyclone Cindy (as her friends call her) was a force to be reckoned with on a mountain bike, and most recently traded nubby tires for running shoes. Since December she had been training and running in the wind, snow, rain and all of the winter elements Michigan has to offer. She could always be seen proudly sporting her WSI gear. She recently participated in the Gazelle Girl Half Marathon and the Borgess Half Marathon. 2 half marathons within two weeks; a personal milestone. AND she improved her time by 8 minutes. She is not giving up on clipping in just yet though. With her two half marathons complete, she is moving on to triathlons training now.

Sunday, May 22 was a day of triathlons near and far for WSI teammates Danny Wolin and Charles Elder.

As a beginning of the triathlon season tradition for many 3 years, Danny Wolin competed in the Seashorse Duathlon. With Danny’s speed on both the bike and run, he traditionally places in this event. With that being said, he is also constantly racing against himself and striving for new course

PRs. If you are not familiar with the Seahorse Triathlon/Duathlon, it is a great beginning of the season event put on by 3 Disciplines. The event is held in Coldbrook Park in Climax, Mi. The run is definitely as tough one, though. The run is nothing short of a good cross country route, with woods, hills, a campground and stair climb. At the beginning of the duathlon start, there was a 16 year-old girl whom intimidated everyone, knowing she was a force to be reckoned with. They took off and while Danny kept her in sight for a while, while another 3D sponsored racer was pulling some very fast splits-close to 6 minute miles- hard for a trail run. He caught the girl after a mile or so on the ride and caught the other racer with about 4 miles to go on the bike and had a 4 minute lead on him for the second run. As always, a lead is never a lead until the finish. Danny’s opponent caught back up to him a mile and a half into the second run, and that was all she wrote. Second place with a new course PR.

About 10 hours south, Charles Elder participated in the Ironman Chattanooga 70.3. He joined with

Team ZERO for this event and raised over $1700 for ZERO Cancer, and organization dedicated to ending prostate cancer. Leading up to the event, Charles put in a lot of effort raising funds, including a 12-hour cycle-a-thon at the Battle Creek YMCA.

The weather for race day was perfect! With a good swim time, a strong bike and a decent run, he finished in 6:07, just shy of his 6 hour goal for this time around. There were some amazing athletes on the course that day, with the winner finishing in 3:46 with an average bike speed of 27 mph! The world championships will be held on that course next year.

The swim was a point-to-point in the Tennessee River with about .2 miles upstream and rumored 8 foot catfish. The hills were what you would expect in Tennessee; mountains. The course was scenic and enjoyable and the run was lined with spectators, including Elder’s 4 kids.

For Charles, this event was all in the training plan for the full Ironman in Louisville in October.