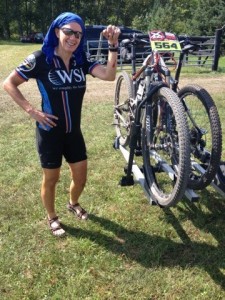 The X100 Michigan’s Ultimate Mountain Bike Xventure, starts and finishes at Ranch Rudolf near Traverse City Michigan.  The race is either 100 miles or 50 miles. Thank goodness I was smart enough to do the 5o miler!  The both races (50 and 100 milers) are mostly twisting single track that wind in and out of the country gravel roads, two tracks and fire roads.  The trail takes you through the most beautiful terrain Michigan has to offer: deep woods and steep hills around lakes, streams and ponds.  The trail was very challenging and long.  Aid stations were set up every 10 miles which seemed like forever!

I had been training on gravel roads and had not been training that much for technology and twisty.  So this race was very challenging to me.  Also I don’t think my body had recovered well enough from O2S 2 weeks before.  I think I am make excesses for my slow time!  I will try to do this race again next year just to improve this slow time!

I have raised $200.00 for Patti Pals Relay for Life in Richland Michigan. Patti lost her life to breast cancer serveral years ago. All of us know someone who has or who had cancer. Cancer is a scary disease and we need to find a cure for it. 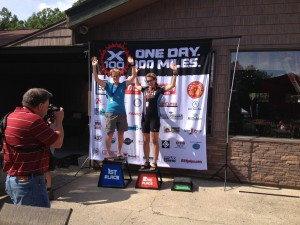 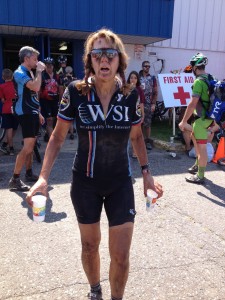 Race report and fundraising for Ore to Shore Moutain Bike Race:  It was August 9th in Negaunee Michigan.  The morning air was fresh and brisk.  I had signed up for the 48 miles of hills and sand and I was questioning why did I do that???   I really would like to be hanging out at the camper now instead of riding this route.  There were a lot of bikers that looked fast and mean and lean!  oh well it was what it was!

The O2S (Ore To Shore) race is a point to point race that starts in Negaunee (Hard Rock 48 miles) and finishes in Marquette.  The Soft Rock (26miles) starts in Ishpening and also finishes in Marquette.  The course passes underground mining ores and runs along the Dead River and along Lake Superior shoreline.  It is a beautiful wooded wilderness course and very much a great ride.

The gun went off and we started.  The route was a two track for most of the way, but it was a very dusty, iron ore red dust.  My lungs started to hurt within a mile.  I knew this was going to be a long 48 miles.  I followed RJ and DeAnn on the Tandem for a few miles til the left me behind a few slower riders that I could not get around.   I needed to find someone to draft off of quickly.  Then I felt someone drafting on me.  I looked behind and it was two guys sucking my back tire.   I told them fine but we would need to take turns.  Well that didn’t last, when it was my turn to draft –  then left me.  Who said a race was fair.  oh well. 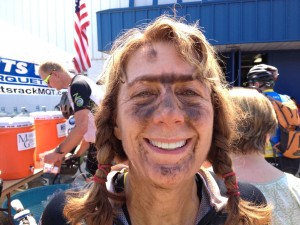 About the first 26 miles of this race is tough, a lot of rocks hills, and sand pits not anything that is real technology but you need a lot of legs and lungs.  The last 20 so seems to be easier (or maybe it was I thinking it was down hill).  There was still a lot of sand, but didn’t seem to be hug hills or any single track.

Overall this is a great race.  I am planning on doing this race again next year and spending the whole week after the race in Marquete and Cooper Harbor area Mtn biking.

I have raised $200.00 for Patti Pals Relay for Life in Richland Michigan.  Patti lost her life to breast cancer serveral years ago. All of us know someone who has or who had cancer. Cancer is a scary disease and we need to find a cure for it. 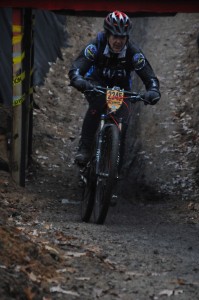 Yes the was Mudman this year.  My bike did her job well this year…no issues.  A non bike ride ask me what made my bike so much better than others and why did I not have issues with my chain?  I said it was just luck why I didn’t have issues.  It was not my time to have issues on this race.  There will be another race that I will have a flat or a broken chain or another mechanical.

Iceman this year was a mess.  Wet, muddy, and just pure old cold  – just a mess to be out in it.  When it was done (which seems like it took ever!) I wanted to be done and get out of my wet clothes – no pictures, no waiting on anyone, no beer, nothing I wanted just warmth and dryness now!!!

Before the race I had to mentally talk myself into racing.   My husband had already said he didnot want to ride and half way thru race stopped to help someone and bailed out of race.

However, within 2 or 3 miles into the race I warmed up and thought the mud was fun.  I was just worred my chain was not going to make it.  I had 1.9″ wide tires on and thought they were not going to be good in the mud.   But I don’t think any tire width was good.  There were fat tires wiping all around me.  The conditions were slippery for everyone.  I was use to riding on those tires and felt good-I just set back and went hard. 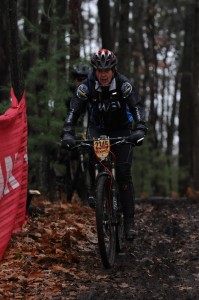 Once I reached the logging road it was a deep mud pit (I started in wave 19).  I crashed at the top of road – got wet and got passed by about 7 guys which made me see how slow I was going!  I guess they were glad I moved out of their way.

The roads seemed so slow with the mud and wet sand.  We road the trail Oct 17 and it was so much faster.  During race I never got into my big gear not due to chain but tired, heavy legs.  My legs could not handle the load they were burning on fire with pain from the load.  I could not put the big gear felt like I was going so slow.  When I saw that I still had 10 kilos to go and reach my time from last year – I was sick.  Really had to get my head around!  I had eaten everything I had on me and everthing they handed me at the aid stations (that included all the sand and mud from my gloves) I didn’ t have any energy.

Time:3:28 (somewhere around there) 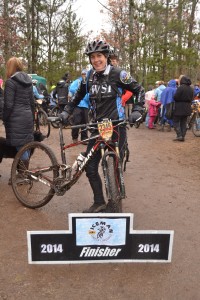