It was a beautiful day in Traverse City, MI on January 17, 2014.  Weather was a little overcast with temps in lower 20, no wind and lots of snow.  Snow is important when you want to use your snowshoes!  But running in your snowshoes in heavy snow is a big challenge.  The race started at 9am and we all were ready.  The key (besides training) is know how to dress.

This year is our 3rd year of running the Bigfoot Boogie.  It is a lot of fun if you like cold, lots of people on a single track and lots of snow.  The Bigfoot Boogie is a 5k or 10k race in snowshoes around the Vasa Trail at Timber Ridge.  The 10k is a two loop.  The trail is on the groomed Vasa trail but most is thru the woods on single track.  If you want to pass someone there is effect of running in deep snow.

I started the race too far in the back of the pack.  Note to myself when people are lining up be sure to be lining up in the correct place.  We all had to move over to the start line (which was marked Finish line).  When moving over I moved back too far.  I should not be so nice and become passive aggressive, but didn’t want to look too pushy.  Anyway, I thought once we start I can pass most people since the Vasa Trail was wide enough.  But I think others had that same idea and I was not able to get around poeple before we started the single trail.  The snow was deep and not packed at all.  I had been running in our hayfield and it was not packed or groomed.  There were a lot of snow drifts in our field and at the time of training I was very upset that I had to run thru those.  But as I was running the race I felt comfortable, but not as fast as I wanted….I just couldn’t get around those people.  When I did pass, I had to go outside the trail which was about a foot deep and that took a lot of my energy.  So I did my best….waited til I had a chance to pass on the Vasa Trail.

I did the first loop with lots of people around me or infront of me…but then on my second loop it was just me, the snow and the time clock!  I keep thinking I must be last I must push on.  I ran the whole thing but the big hill…yes I had to walk up it.  But most of the people who were in front of me were walking also.  They were the last of the 5kers and they moved to the side and cheered me on.  That really helped me focus back on the trail and made me run again.  I wished I had done better.  Don’t we all say that once we finish – well I know I say that.  I wish I had done one more training run, one more leg press!  one more bike ride – I have a real job and a family that takes time away from this excerise stuff.  Oh well it is what it is!  I did it and I finished.  No I didn’t get the big Big Foot man but I did finish 2nd in my age group and finished in the 58% in womens and 68% over all.  I got a cup full of chocolate candy and husband that said GOOD JOB I am proud of you!

Here is Chuck Brenner and me before the race started. 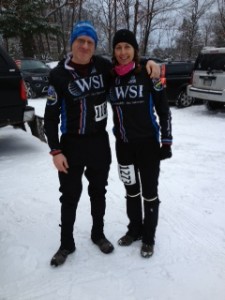 So Sara and I finished off the year with a 5k in Detroit on New Year’s Eve. The race was on Belle Isle which always provides cold and windy conditions. Not a lot to talk about a 5k race other than run and run fast. We finished together in 22:50. Sara finished 2nd in her age group and I took 12th in mine.

On January 4th we started the new year with a 50k at Yankee Springs “The Yankee Springs Winter Challenge”. We couldn’t have asked for better conditions for a winter challenge. The wind was mild and the sky beautiful blue with bright sunshine. Footing was tough and the hills were just as bad. We had to do two 25k loops of a combination of the mountain bike trail and the Chief Noonday trail. After our two loops and nearly 7hrs of running we reached the finish. Sara placed 5th in the women’s division with a finishing time of 6hrs, 23min. I took  3rd in my age group with a finishing time of  6hrs, 55mins. What a great way to start off the new year and looking forward to even more races in 2014!