When teammate Dan posted a note to our Facebook group a month or so ago asking for any takers to join him in Marquette, MI (da U.P., eh) for the 2018 Polar Roll Fatbike Race, I figured it would be a great opportunity to do something I’ve never done before. Little did I know what I was in for when I lined up at the starting line Saturday morning for our 8 am mass start. Unfortunately, circumstances changed and Dan was not able to make it, but I talked Jeff into coming along (and I think he’s still debating whether he was glad he said yes). 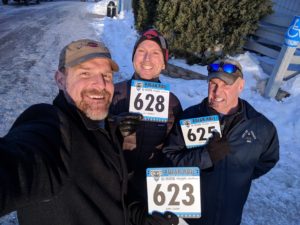 We arrived in Marquette on Friday and stayed with a buddy, Jay, who lives just a couple miles from town. That made rolling down to town for the start possible and we staged my vehicle in Ishpeming after picking up our race plates. Promoted initially as 35 miles, the race ended up clocking in just under 41 miles and was point-to-point from Marquette to Ishpeming… so it was important that we had a way to get home when done (plus some warm and dry clothes for apres race).

After dropping the vehicle, we headed downtown for a beer and to check out the UP 200 Sleddog Race start. Another friend from Chicago, JJ, was in town for the short race and was camping out a one of the brewhouses at the bottom of the start hill. What an amazing experience! Being a dog lover, just seeing the look on these dogs faces as they took off for their 200-mile adventure gave me goosebumps. If you ever get a chance to check one out… DO IT! As I publish this race report from the comfort of being indoors enjoying a hot cup of coffee, it’s hard to believe these mushers (and their dogs) have been on trail this entire time and are just now starting to cross the finish line! 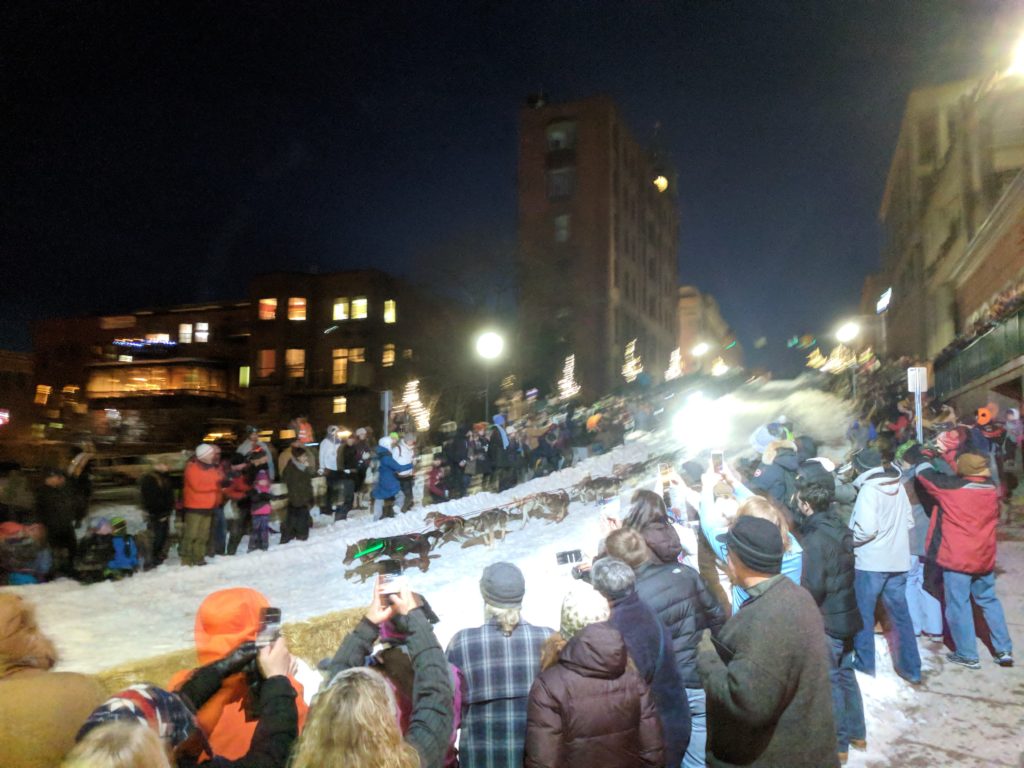 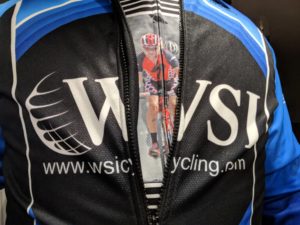 After a carbo-load dinner and a good night’s sleep, it was race morning. Figuring that I’d need all the help and inspiration I could muster for the 40-miles (mostly uphill I heard), I decided to wear my memorial Michael Seaman jersey under my thermal coat. In case you don’t know Mike, he was an amazing cyclist taken too soon in an accident this past summer and is missed by all that had the pleasure of knowing him. While I’ve heard he never got the “fatbike” bug like I did, I suspect a race like this would have been a great fit for him (and who knows, may have even convinced him to get off the XC skis. Unfortunately, we’ll never know… but my goal for the day was to make sure we made it across the finish line together. 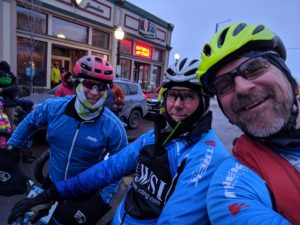 Rolling out from Jay’s house, it was a balmy 12 degrees, but that was a good sign since we were hoping for cold temps so the trail remained nice and frozen-hard. I certainly was not too excited about that distance on a mushy trail. The good news was the weather was amazing and I’m not sure how the trail could have been in any better shape. Me, on the other hand? Well, let’s say I could have been in better shape but I was excited to be part of this year’s race. We joined about 270 other crazies in downtown Marquette and before we knew it, we were off! 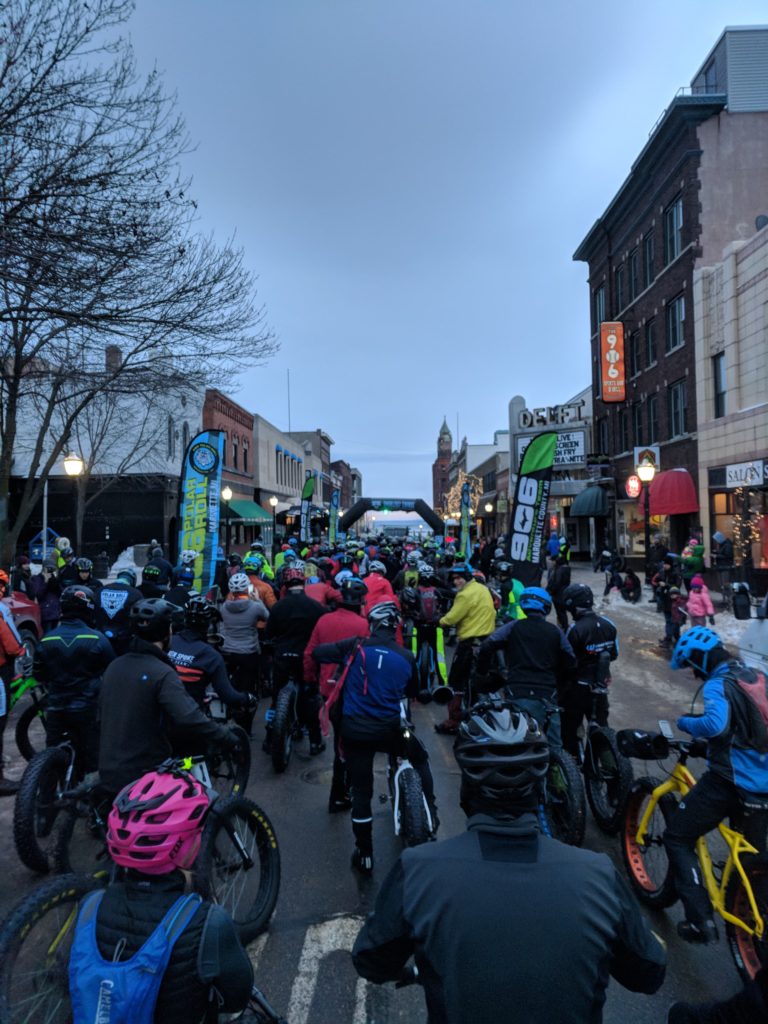 And We’re Off – Uphill For 40 Miles (Singletrack Included)

Before I begin… if you’d like to check out the Strava recap of my race, you can visit my activity here. Also, it looks like they have a cool new feature called Flyby that shows you moving activity. In either case, be sure to respect the elevation graph. And yes, when I said uphill I wasn’t joking. 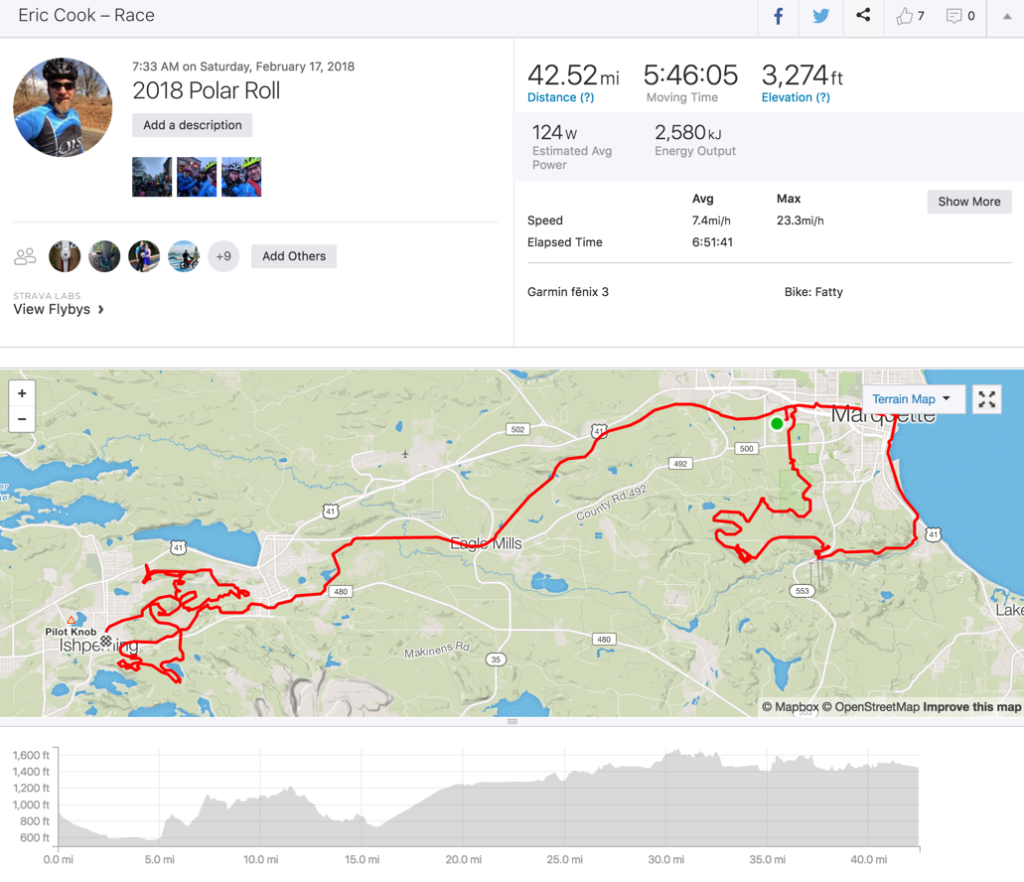 After about 2 miles along the beautiful shore of Lake Superior, we made a right and headed into the trail. This was my first time on a “real groomed” fatibke trail and it was amazing. Unfortunately, I learned real quick that you better pay attention, because if you deviate from the packed snow, you go down (quickly). My first of many “snow angels” came at mile 2.4 and while floundering in the deep white stuff watched other riders fly by. First lesson… don’t fall.

The trails in Marquette were some of the most fun and beautiful trails I’ve ever been on. The snow was perfect, the weather was great and I was with a couple hundred others that were all loving life. Of course, we were only a few miles into the race and the “hating life” part of the race wasn’t going to happen for another 25 or 30 miles.

Coming out of the Marquette singletrack, we settled in and started an uphill 10-mile grind to Ishpeming. Pedal, pedal, and then pedal some more. And just when you seem to think you’re finally at the top, it kept going. It seemed like the grind would never end, but I just kept things in perspective (remembering the jersey that I was wearing) and the crankarms turning. It was a balance between pushing too hard and the leg cramps setting in and spinning just below “threshold” to ensure that I was going to be able to finish. Eventually, we reached the next segment of singletrack and things got fun (sort of) again.

While the first several miles of trail offered the same 2’+ wide riding surface winding through the woods, eventually the long race (40 miles) intersected with the short course (13 miles) that started and finished in Ishpeming. By the time I arrived, all of the short course competitors had finished, so no worries about mixing of traffic. However, the trail got even tighter, with about 6 inches in some parts packed enough to ride.

Combine my fatigue from the prior 25+ miles, leg cramps, and inability to focus, let’s just say the tight trails were a comical exhibition of fatbike snow angels. What made it even harder, was once you were off the packed trail, the snow got really deep so getting out took a couple of minutes. Multiply this process “several times” and let’s just say words coming out of my mouth are not suitable for this post.

Hugs and Bacon – The Home Stretch

Finally, after what seemed like an eternity of flailing around in the snow attached to my bike, I exited the tight, skinny, and least-favorite part of the race to the final aid station of the race. I saw signs for Hugs and Bacon… so I knew the finish was close. Stopping for a final bit of “energy” I munched down a piece of bacon, enjoyed an ice-cold Coke, and yes… I couldn’t resist a swig of a local micro-brew. Many of the other racers taking their final pitstop with me also commiserated with me on how much the last section “sucked” and how the final seven miles were going to be much more enjoyable.

While I got my bacon (and then some), a hug was nowhere to be found. But, I was ok with that and took off on the last part of the race towards Ishpeming High School. The remainder of the race was pretty uneventful, but not without challenges of a few more steep hills that required further dismounting and hiking. Plus, by now the temps started to get warmer and combined with the preceding riders some of the downhills were getting pretty icy (taking me out at least once).

Finally, I got within earshot of the race announcer and music, so I knew I was close. Knowing how hard I fought to be able to pedal across the finish line left me with a great deal of satisfaction. I had a local guy join me at the Hugs and Bacon station and we kept each other company on the last stretch. We came across the line together and celebrated our accomplishment together with a gloved fistbump to finish the day.

An Amazing (But Not Fast) Time

My total time on the course was 6 hours, 25 minutes. Given that the guy who won it completed the same distance in half the time (yes, I know… don’t judge), let’s just say I’m not expecting the sponsor offers to be coming in anytime soon. However, despite the long day in the saddle looking back on it now, this was one of the most epic rides I’ve done in my lifetime of cycling. The beauty of the U.P. during this time of the year is something hard to explain if you’ve never seen it for yourself. There were several times I wanted to pull off the trail and take a photo, but I’ve got the memories forever engrained in my mind.

Jeff killed it, finishing in just over four and a half hours. He said afterward that he was riding in top-20 until he got off-trail and the deep snow got him. Given the width of the trail and tight riders, he had to let about 30 or so cyclists ride on by and that was pretty disheartening. Jay, our host for the weekend, also did great and I think he came in at the five and a half hour mark. I gave Dan a rundown of the race on our way back home and he was super bummed that he had to pass this year. However, he’s already working on me for the 2019 Polar Roll. Now that I know what I’m up for, a little more training will be in the plans for next year!