The 2013 Maybury Time Trial was the 8th race in the MMBA Championship Points Series, and a race that I had been looking forward to quite a bit.  I had finished 3rd at Yankee and 2nd at State Games, and since only 2 out of 3 of the CPS time trial races count towards your points total, the only way Maybury was going to matter to the standings for me was if I placed higher than 3rd.  There’s also the time trial “series within a series” for the CPS (to encourage racers to do all 3), but I wasn’t particularly concerned with that.  In short, I wasn’t feeling much pressure for this race, and really just wanted to go out hard and have a good time on the trail.  Livening things up a bit was the fact that there were quite a few sport SS riders competing – Eric Wolting wanted to lock down the time trial series in his last race in the sport category (he’d won at both Yankee and State Games); Tony Cressey (who beat me by a lot at Pontiac) was back racing following a broken scapula suffered at Mud, Sweat, & Beers; my Wolverine Sports Club foes Tim Fargo & Fabrice Portes were in attendance; and Talon Tramper had made the trip with his Village Bike crew from GR.  Oh, I should also mention that they had reversed the course, which eliminated any benefit the local riders may have had.

A little about the course – Maybury is 75% tight, technical singletrack with lots of rocks & roots.  Reversed, there’s basically no intuitive way to carry momentum, so it required a really active riding style (read: a LOT of work).  For the race, it was roughly a 10-mile loop, with 1.5 miles of grass/gravel/2-track at the start, 6.5 miles of singletrack, and then another mile or so of pavement/2-track/grass at the end.  The race organizers gave everyone a chance to pre-ride the course on the Friday night preceding the race, which I took advantage of.  I’m not sure it really helped me, because there’s so much technical stuff that your brain just goes “Roots, roots, roots, rocks, roots, horrible switchback, surprisingly terrible climb (featuring: roots!), roots… bzzzzzzzzzzzzzzzzzz…” Nothing really sticks.  But it was good to get a decent spin in my legs the night before the race, and it did give me a general idea of what to expect.

The morning of the race I was feeling pretty great.  For the past two weeks, work had been rough with long hours and high stress, and for the first time in a while, I was feeling scrappy.  Unfortunately, this didn’t exactly translate to how I felt during the race, but it was a good way to start the day nonetheless.  My beautiful bride Jessica and my brother-in-law Eric were kind enough to accompany me, and we arrived at the park around noon.  I had a 1 p.m. start time, so I got my business together, chatted with Mr. Wolting, and cruised around for a warm-up that was probably too brief.  It was relatively hot out (high 70’s), for what’s been a very cool August, but otherwise the weather was perfect.  So, on to the race.

I was 5th off the line behind 3 Expert/Elite SS riders and one sport rider (Jonathan Bolenbaugh, I believe?).  I had a clumsy start, missing my pedal and jamming the nose of the saddle into my lower back/upper butt.  Ugh.  On the initial out-and-back grass/2-track, I could tell I wasn’t going to feel great during the race – heavy legs, rough breathing, etc., likely due to the heat.  But cycling is suffering, right?  Push through it.  I caught the sport SS rider after about 2 miles in the single track, and he kindly let me pass.  After that, I was basically alone all race.  The expert/elite guys in front of me were clearly extremely quick, and I never saw them.  I did see some of my sport SS competitors on the trail where it doubles back on itself, and towards the end I could tell that Eric was making up distance on me, but I was never passed during the race (which, during a time trial, means you’re cooked).  I kept my head about me, made sure I stayed upright on my bike, and tried to find the best lines through the root maze.  There was a climb at the end of the course that everyone had been griping about, as it really catches you off-guard, and I did have to do a bit of a run-up for that.  Otherwise, I felt like I was riding competently, but I didn’t feel fast.  Eric caught up to me right at the end of the course, and he crossed the line right behind me.  That meant I definitely did not win, as he had started over a minute behind me, but other than that I had no clue how things were shaking out.  When everything was sorted, it turns out my time of 41:27 was good for second place.  Eric had tied with a geared sport rider for the fastest sport time of the day at 39:59, and Tony Cressey had finished for 3rd at 42:25.  Given how I felt during the race, I was very happy with this result. 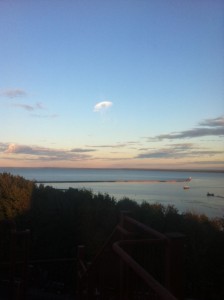 As any of us have experienced; work trumps life, in fact, I try to operate in the exact opposite hierarchy- but it happens.  So far this year, training has taken a big hit and it shows up on the weekend races.  My goal this year was to try to crack the top 3 in the Sport Tailwind series (last year I finished 3rd, but this year, the race organizers pulled out my strongest race-the stage race) and I now currently sit in 6th after finishing the last race that I can make for the series.

Race season is far from over, but I want to catch up with a few notable races.  In mid June, I competed in the Lumber Jack 100.  Or rather, I showed up hoping that I could mentally overcome a huge lack of training (the volume in anticipation for the LJ100 is huge—at least it should have been for me).  Eric Cook and Charles Elder joined me and a buddy of mine (Kayo R.) at my dad’s cabin to prepare for the 100 mile race.  Without belaboring the details, my legs cramped so badly that after 50 miles, I knew my day was over.  I stopped at the remote aid station, hoping to find a short cut back to the start, and they told me that the fastest route was to follow the course.  I completed about 60 miles of the LJ100 and felt that I wasted my entry fee.

Early August, I returned to the Big-M to exercise some demons only to find that the demons were laughing at me all three laps of the Tailwind 18 mile race.  I finished DFL in 7th place for my category.  (Prior to this I finished 3 races in a row one out of the medals-a completely discouraging reality check.)  I had signed up for the Ore2Shore the following weekend, so I stayed in the cabin to work out, stretch, eat well and focus on Life and cycling (I had recently been honored with a promotion to Director at the U in our Tech Transfer office).

The next weekend, August 10, was the Ore to Shore Mountain Bike race.  The Ore2Shore was in the beautiful back drop of the Upper Peninsula’s Marquette with a  crystal blue sky and crisp morning.  I love being in the UP and the 9:45 start helped keep it from being too miserable of a morning start.  The start was a bit of a wonky roll-out on pavement with a lot of eager riders trying to get to the front of the race.  I did not witness any crashes, but I saw some really stupid moves.  Some challenging short hills at the beginning of the race helped line us up into 2 threads of bikes and riders heading up the Negaunee country side.  I was feeling okay, but felt like I was losing places even though it was still early.  We then came to a train (yes a train) that was across the race course.  The race piled up as if we were salmon at a dam until the leaders saw that we were only yards away from the front of the train, so we rode quickly to get in front of the train before it started to move again (which it did right after we crossed).  We were bunched up and walking for quite a while until we got into the really steep climbs (one hill called misery hill) which was impossible to ride up due to everyone walking their bikes in the middle of the hill.  In these hills (about 10 miles into the race) there were some short steep down hills with some huge rock outcroppings.  My font wheel found a crevasse in one of these down hill rocks and I end-o’d and hit harder than I have ever hit before—so hard that my vision began to narrow because of the pain on my left side.  (I knew that the best thing for me to do was to just ride and hope that the adrenaline would mask the pain until we were done.)  This worked until a guy stopped in front of me in a huge sand pit 5 miles from the end, I slowly fell to my left side in the soft sand but the pain all returned as a reminder of my age and lack of training.  With a few miles to go, the effervescent Angela Bowers came flying by and made me forget about the pain and think about how lucky I was to be doing this.  I pushed this race as much as I could possibly push, hammering all the way through the last 2 miles of winding pavement to the finish line.  I finished in 3:30, which was 36th of 63 Men age 50 to 54…not bad,  but then the season has been a series of races against myself anyway.