This weekend was the Gull Lake Triathlon and WSI Cycling had several racers at the event. The Bridges family not only participated, nice warm and clear water. The bike was a rolling ride in Barry County on fairly good roads at least better than we’re used to. The new Aero wheels I got this week worked wonderfully, I averaged over 20 mph, a first for me. Thanks Team Active! The run was hillier than I thought but I managed to get through it with a respectful run time. I was able to fix the mistakes I made at Seahorse earlier this season so I’m very pleased with my race. 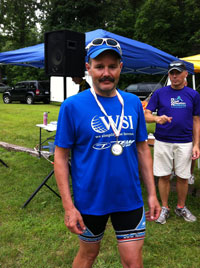 Why do I do these? Misery can be so much fun, I guess. I also did the Olympic distance triathlon, and also came in 2nd in my age group. This course is beautiful; the lake is crystal-clear, the bike and run are rolling hills. The weather was fine, warm and 70s as we started out, heating up to the low 80s by the end. I’ve never been a fan of running in the 80s, but I guess after complaining about a cold winter, what can I say? Today’s goal was to work moderately keeping the heat in mind, and focus on the nutrition part. I did fine there. The swim just seems to take me FOREVER!! I just kept those buoys in my sight and worked toward them one by one.

By the time I got to my bike, I was so thankful to have some time to ride. The bike is my favorite part, and the rollercoaster hills were fun to play around on. Then I remembered… I need to have SOME legs left to run. The run was fine, but feels so slow after the bike! I like the out-and-back run, as I was able to see some of my WSI teammates, friends and family members finish up their race, cheering and giving High 5s. Gull Lake is a great race, I really enjoyed it as a first-timer, and I would recommend it to anyone who’s looking for a great local race. 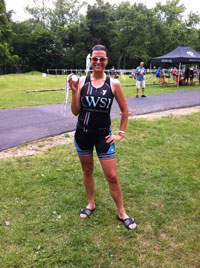 Gull lake triathlon was my first Olympic distance triathlon. The swim was very nice, but was a struggle at times, I had a very slow swim, with a lot of ground to make up I headed onto the bike. The bike course is great, with smooth roads and some hills made it interesting. With just averaging under 19 miles per hour, I felt great and saving something for the run, which is where I felt even better. Finishing strong and got 1st in my age group. 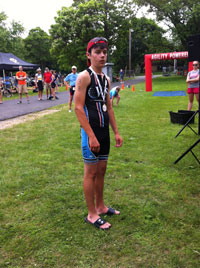 Gull Lake Triathlon was a great race. I did the sprint triathlon and finished in first in my age group and was the 7th women overall. The swim was nice and clear and seemed pretty short. The bike was great- only a few small hills and only like 10 miles. I was able to go pretty fast. The run was a 5k and relatively flat and on pavement. I started slow then got faster as the run went on. I wasn’t able to see the finish line very well coming up to it, but I soon saw it and sprinted the finish. Pretty good food at the end, and another great race. 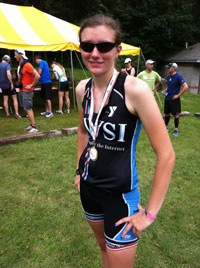 The plan for this season’s racing and training is with the intent of competing in RAAM 2015.  Each one of these races on its own is grueling, and done within five days, fits perfectly into a training program for RAAM.  I was the only WSI team member at the 24hr and yes; it was lonely at 3am. There were other teams  grouped up and I felt their energy as they whizzed by. Part of me was a little jealous, but deep down my defiant side  was deeply motivated to keep going.  The Lumberjack is a tough course, but so much fun because other WSI team members were there competing.  There were also team members and fans at the event supporting racers Eric Cook, Dan Frayer, and Jack Miner. What a difference in motivation between the 2 races!   I used my intrinsic desire to succeed solo aginst the world at the 24hr and my love for comraderie and shared suffering with friends at the Lumberjack.

Josh Haas here; the 2014 State Time Trial Championship brought some good talent to a hilly, technical course in late June.  With three turnarounds and a short 16 miles ridden, it was an odd route that catered to the more technical riders.  It was certainly a learning experience for me and I felt I rode well given where my fitness level is currently.

I missed the podium by 57 seconds and I placed 4th in my division.  I was happy with my performance and believe the hilly course did play to some of my strengths.  Pre-riding the course the night before was also very useful.  WSI was also represented by Danny Wolin and the time trial master podiumed with a 3rd place finish in his division.

I’m looking forward to next year.  The goal is to come in stronger and faster than ever with a podium finish.


Summer marks a busy season for WSI cyclists. Of course there are races almost every weekend. In addition, WSI loves to support the local community by volunteering at races. The past 2 weekends they have had the pleasure of leading out for both the Cereal City Classic on June 14th and the Cheetah Chase on June 21st.

The Cereal City Classic, an annual race held during Battle Creek’s Longest Breakfast Table Festival, is hosted by one of our great sponsors, the Battle Creek YMCA. They reported over 650 racers this year participating in both the 5k and 10k events. Racers even had the pleasure of meeting Tony the Tiger, himself.

The Cheetah Chase is a unique 5k through Binder Park Zoo. The course is a challenging run for racers, winding through the zoo and making use of it’s many terrains. Definitely not a course for the road bikes. This year the Cheetah Chase boasted over 1,500 runners for the 5k event.

Shayne Thomas here…I’m glad to report that I have done the second race in the HFP Fit Family Series-Maumee Bay Triathlon at the awesome state park of the same name near Toledo Ohio.  Once again doing the sprint triathlon in the age group-fat, old, & ugly.  It was the second time that I placed third in the over 40 over 200lbs.  I was generally satisfied with my times.  I came out of the swim with my buddy and fellow Clydesdale Mark.  We talked about how good a pizza sounded right then as we trotted up to the transition.  Toledo is table top flat.  The only challenge on the bike is wind.  There was a bit, but, not as bad as it has been in the past.  The brutal run is also flat, but, is run in zero shade.  I thought a Guinness sounded pretty good and would quench my thirst, but, realized it would take a special person to drink one during a triathlon.

I literally grabbed my metal and my time slip and trotted off to gather my stuff from the transition.  As quickly as possible I needed to be in Mansfield, Ohio for the Miss Ohio parade to drive my daughter’s float.  She is the reigning Miss Mansfield’s Outstanding Teen.  www.shaylathomas.com.  I got a lot of questions about why I had my weight and age on my calves, unfortunately, they started to cramp halfway through the parade!!