As traditions go here in Michigan, the first Saturday in November is blocked out on many of the area’s mountain biker’s calendars for the annual trek to Traverse City and the point-to-point Iceman Cometh Challenge. Started in 1990, the very first Iceman had only 35 riders and their $5 entry fee took them from Kalkaska to Traverse City (one of the first “point-to-point” races around, just to see if it could be done). Now, with close to 6,000 racers participating every year, it’s turned into one of the nation’s largest single-day mountain bike events.

This year WSI Cycling had several riders in the mix and we’re proud to share some of their experiences below. Enjoy their stories, and great job team! 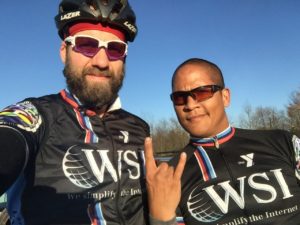 Preparation for the Ice Man starts on the Sunday morning after the previous year’s race.  I wake up with quads burning from Anita’s last stand followed all too quickly by wood chip hill.  My throat is wrecked from heckling the pro racers and my head throbs from three too many of the main sponsor’s artisan craft brewed beer. (Thanks Bells Brewery)

My training gets more specific with the intensity and intervals in September.  In October I spend every waking second not with family or at work, dedicating energy, thoughts and training to 30ish dirt trail miles between Kalkaska and Traverse City.

Hours of sacrifice for minutes off the clock.

One week before the race I lube my chain daily, check every bolt,  talk to all my friends about air pressure and lose sleep every night thinking about tire choice and things not to forget in my gear bag.  Shorts, socks, shoes, shades………. 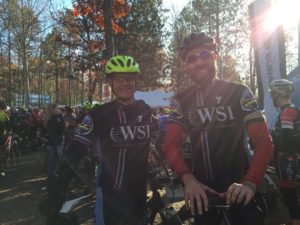 The Stars were aligned for 2016 with near perfect trail conditions making the course the fastest it has been in years.  Herded into the starting gate in wave four, I knew holding wheels and taking risks was a prerequisite for a top 10 finish.

From the start line in Kalkaska to the first cold beer touching my lips in Traverse City was a 28 mile fat tire frenzy of 25+ mph pace lines and lung wrecking inclines.  Holding on to the wheels in front of me was the game plan, trusting a stranger to pick the right line and making a pass when the trail allowed. 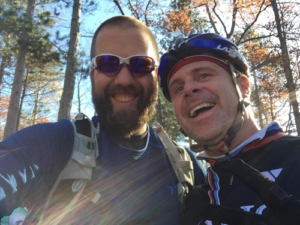 The strategy is the same every year.  Ride smart until Williamsburg Road (over half way) and cash in all the chips before you cross the line.  I played my cards just right, keeping the concentration on point and friendly rivals in sight. 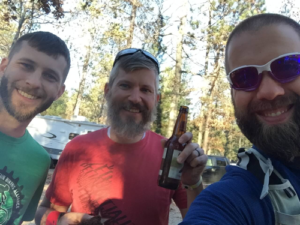 The long drive at dawn down 131 is a somber one.  Thinking about the after party at Timber Ridge Cabin #77 (Thanks Darrel) with Bells Porter pounding between my ears.  Remembering which pro racer made the decisive move for the win and asking my wife to check and re-check the results and strava segments.  How did the split to dockery road compare to 2014? What was your training partner’s time at Williamsburg Road?  Should I have made a move sooner?

This is when the planning starts.

A very special thanks for the continued support from my wife Holly, WSI Cycling, Trek Store of Battle Creek and Velocity USA. 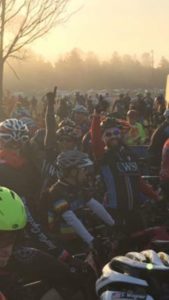 I did not get a good starting spot at the line. I positioned myself at the front of my wave where the woman was holding the “wave 4” sign. Suddenly, she swaps her sign for a “wave 5” sign and just like that, I was the last in a wave of 100 racers. So I spent much of the first few miles passing riders in my wave.

The new start had us in an open field that led almost immediately into the fire roads leaving very little time to position myself in any ideal way giving me little time to get into an ideal position at the front. As a result, it was pretty slow going for the first few miles. My plan was to work with WSI Cycling teammate Dan Frayer at least to Williamsburg Road. He was about 10 riders ahead of me for a while. I finally reeled him in and we rode strong for a time. He fell back a couple of times and then return. By Williamsburg road, he fell back and I had lost him for the remainder of the race. My rabbit for the remainder of the race was Joe Boynton, who was sporting a Captain America kit. He was in my sites for all but the last 4 remaining miles. 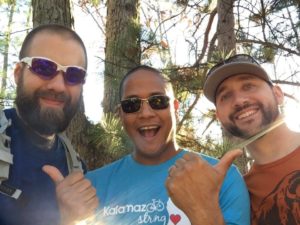 I have never felt stronger at Iceman. I know the course and weather played a big role in my fast time, but my preparations were better than they have been before thanks in big part to Frayer who got me up for weekly 5am crossfit and 4:30 road rides. I also lost 20 pounds in September thanks to an unorthodox bet with Dan and other friends. As a result, I did not take as much time to recover from hard effort. The open sprints were fast and the hills did not seem as steep or long.  I could not have done as well as I did without my friend Dan Frayer.

I also want to give a big thanks to WSI Digital for allowing me to race for the team! Being a part of the team inspired me to train and race more that I have in a very long time. After some serious holiday R&R, I look forward to restarting the training engine for the 2017 season. Barry-Roubaix, here I come! 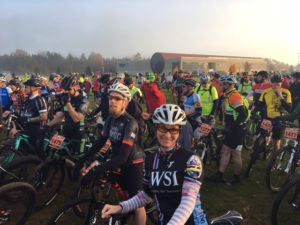 Just wanted to send a quick race report for the 2016 Iceman Cometh Challenge. This year featured some incredible weather and was not a very “icy” Iceman, compared to previous years. The course was so fast, I found myself breaking on the down hills most of the time! I finished the race in 1:58:47, which was fast enough to put me in fourth place for my age group! It was great to see so many cyclists out for the day enjoying the sport we love and I’m already looking forward to the 2017 season! 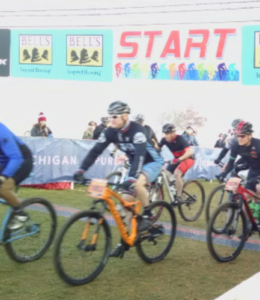 This year’s Iceman weather was amazing! Couldn’t ask for better conditions. The course was fast and I placed 44 out of 107 at a 2:01 flat. Very happy with my time knowing that I was only able to put in around thousand miles this year. As always, the atmosphere of the riders, spectators, and Iceman staff made for a memorable race. Thanks to all!

What an incredible year for the Iceman this year. Perfect weather for racing, awesome trail conditions, very fast, and as always a great post race party. Everyone seemed to have a great time. I can’t wait until next year. 2017 race may fill up earlier next year. So if you’re interested in racing next year keep that in mind. 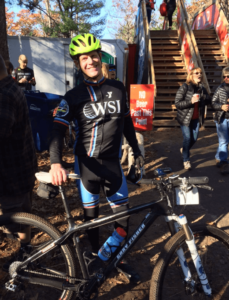 2016 was the 15th consecutive time I have raced at Iceman. This year 2016, was definitely one of the warmest. The trail conditions were very fast. I had my best time at 1:52:02. It is difficult to compare times from year to year because the course gets longer or shorter from year to year. The trail and weather conditions also play a factor is race times. I left the Single Speed home this year and raced with my geared bike instead. Iceman was fast, festive and a great time.

I have uploaded my cam video to YouTube that can be viewed below: