If one would like to earn a badge of honor (or stupidity depending on your point of view) that consists of a red tattoo of an M with a circle on top, also known as the Iromman logo, one would need to swim 2.4 miles, bike 112 miles and top all of that off by running a full 26.2 miles all in one day. 16 hours, to be exact. It just so happens that there are real people out there that are crazy enough to do just that, and do it more than once!

Sunday, October 9, WSI members Kevin and Charles embarked on the Ironman journey in Louisville, Kentucky. This event had been in August in the past, moving to October to ease the midday heat for the athletes. For Charles, this would be his first time crossing the finish line after 140.6 miles. For Kevin, it was his last (so he says).

The morning was brisk. I (Nikki) opted for a coffee and a casual stroll to the swim exit while the racers lined up in a mile long line awaiting their turn to jump into the river one by one. Kevin made it out and hit the bike with Charles following shortly after. Although, when you are waiting for someone to come out of the water during a long swim it seems like an eternity, ask any spouse of an IM athlete.

The Louisville course was great for spectators! With 4 kids in tow we were able to see athletes at the swim exit, coming out of the transition on bike, twice on the bike route when looping through the quaint little town of Granger, again at the transition to the run, and finally at least twice along the run route which looped into town, teased the athletes with a view of the finish line, then made them turn left for another 13.1. 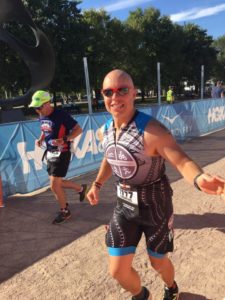 For Kevin, this IM was a goal setter. His goal was to be under 12 hours after completing the 2014 Louisville IM in 12:38. He quickly remembered how hard the race was. The swim was fun “if you like kicking and clawing at 2,700 people in a dirty river for 2.4 miles.” (Yeah, no thanks!) At least with it being in October, it was wetsuit legal this time. He completed his swim in 1:10.  He then made up time on the bike, averaging 19 mph. In fact, he flew by me so fast, the only picture I got of him was his back end. I am a professional spectator, mind you, and great at spotting riders from a distance, so he was really flying!

Being the smart rider that he is, he set his bike computer to monitor his cadence to make sure he spun easy through the rolling hills of Kentucky. Saving your legs for the run is extremely important. And of course, the run is where the pain starts. Kevin describes his marathon as the Frazz cartoon does. When Frazz is asked how he can run 26 miles at a time, he says he does not run 26 miles, he runs 1 mile 26 times.  He completed his marathon in a respectable 4:35, a whopping 30 minutes faster than in 2014!!! Crossing the finish at 11:57:07, in Downtown Louisville, with the music blaring, the street lights vibrant and the crowd cheering, Kevin Bridges, became an Ironman yet again, and accomplished his goal of under 12 hours.

For Charles, the goal was to finish. The amount of time put into training for an Ironman is no joke. Yet, it is so hard to determine a goal time as you NEVER know what is going to happen on the course. The swim was as expected, and the bike full of lovely Kentucky rolling hills that will take your legs if you aren’t careful. The run started off smooth. Around mile 10 his achilles wanted to make sure he knew it was there. It got louder (read more painful) as the run went on. His run slowed to a fast walk, in which I was biting my nails watching the clock and split times via IM updates. The run course was an out and back, twice, so we were only able to see him at the 13 mile mark and the finish. Those last 13 miles, for me, and I am sure for him, felt like forever. Knowing how hard he worked and knowing he was struggling was horrible. I, however, also knew how stubborn he was and that he would be crossing that finish no matter what. As the kids crashed at the finish, we waited anxiously for that moment of glory. The moment you see him appear in the finish chute and hear the announcer say those words; “Charles Elder, YOU are an IRONMAN!”. His first words to me after finishing, and I quote, “That was the dumbest thing I have ever done.” Ask him now, and he will tell you he is already planning for when he can do the next one. Really?!?!

There are even more badass people in our area! Another Battle Creek-er, Jason, joined in the festivities and coincidentally, a Trikat (from Kalamazoo) crossed the finish right behind Charles (which we did not realize until someone pointed it out in the picture)!

Congratulations to ALL of the Louisville Ironman finishers! I am not sure how accurate the statistic is, but they say you are now a part of the elite 1% of the population.