This weekend found me “uncharacteristically available” Saturday morning and actually home for the weekend. That meant I was able to help out at this year’s Dig ‘Em Dash, a 5k run located in downtown Battle Creek. This was the third and final event in the Cereal City Stampede, a series of races in Battle Creek to get people be active and get out in the community. Similar to when the team helps with “bike patrol” for the Oaklawn Hospitality Classic, team members ride the course and help to ensure the runners’ safety by helping at busy intersections with traffic control, watching for injured runners and offering words of encouragement to the racers.

The weather was just about as perfect as it could have been, cool to run and sunny. While I’m not that much of a runner, I know that running in cool temps is a whole lot better than blazing hot weather. While the likelihood of that happening this time of year was minimal, it could have been cold and rainy (like it was the next day), so Mother Nature smiled upon the race organizers for sure.

To help kick things off the Kellogg’s characters all made an appearance (since the event started right in front of their world headquarters, it only made sense). We got some nice “high fives” during our roll-up for the event and it was nice the announcer made several mentions of the team throughout the morning. 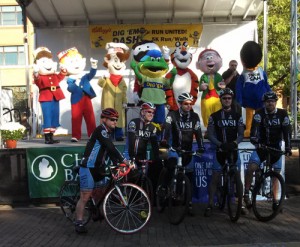 Towards the end of the event (there were runners and walkers) a couple of ladies finishing the walk were just about ready to make the final turn to the finish and gave a “woot” to me when I rode by. I get it… It’s not every day you see grown men riding their bikes around in spandex and shaved legs. Much to their surprise, I “wooted” back and turned around to come back and give them their own personal “biker escort” to the finish. I could tell when I turned around on my bike that was not what they were expecting, so of course I had some fun with the situation. Turns out they both worked at the Federal Center in Battle Creek and a bunch of them had come out to do the event. Exactly what the Cereal City Stampede wanted people to do!

While many of the reports you’ll read on this blog involve team members competing for medals, this is one of those events we do just because it’s a good thing. No awards or podium finishes… just supporting the community and being part of the event. I’m sure the weather had a lot to do with the great turnout for the event, but it was great to see so many people up early on a Saturday doing something fitness related.

After the Dash was over we all headed back to Brownstone for some coffee (thanks Dutch and Team Active for treating!) and then I got to continue my day of riding at Fort Custer with Dwight. We did the Red and Green loops and since I’ve not ridden out there much this year, some of the trail was new to me, so I had a blast. Dave and his kids were just finishing up when we came in, so we got to hang out with them a bit before packing up and heading home.