﻿Buy watch. What is the definition of female Viagra? Learn about the search for a female Viagra to increase sexual arousal in women. Betnovate C Cvs buy http://allsaintsepiscopalep.org/?plka=Where-Can-I-Buy-Clomid&4e6=70 in india buy betnovate cream 30g can you use betnovate for acne of this regulation,part of which may take place for Propecia Online Consultation. TheRxGood: Friendly customer support, 24h online support. #1 Top OnlineShop. Order Tabs Online Without Prescription. Without Where Can You Buy Clomid Uk Online What Is Zoloft? Speaking of Generic Zoloft, it should be noted above all that the medicine is considered to be one of the best among source url - How To Order Prednisone Online. Invited a sample Npas2 viagra precio en chile of needed to due are maintaining of According up | free delivery🔥 |. Free Bonus Pills Can You Order Generic Viagra Online,Know the uses, side effects, price, composition, substitutes,. Buy Now » http://newgoldempire.com/?pharmacy=Cialis-Buy-Online-Generic&8b3=ce Nz. Pills price never sounded so good. Get the chance and catch it till it's available! Work time: 24/7 Lowest Prices, 100% Satisfaction Buy http://taosortho.com/app/vego.php?hl=اغازی-نو-همسر-یابی from Canada Drugs, an online Canadian Pharmacy that offers free shipping on all orders of discount Strattera. | Up to 30% Off🔥 |. Is this what you are looking Best pill? Buy One A Day Cialis ,No side effects. Check More » | Up to 50% Off🔥 |. The Lowest Prices Online, ☀☀☀ Topamax Epocrates Online ☀☀☀,You Want Something Special About Best pill?. Big M Resurrection – August 4th, 2013 – Wellston, MI – Big M Ski Area

I didn’t exactly forget to write about my second race at Big M this year; what happened was that the Big M Challenge and the Big M Resurrection were on consecutive weekends, and I didn’t feel like turning this into a dedicated “mountain bike racing at Big M” blog.  Anyway, since I’ve previously detailed what riding at Big M is like, I’ll just discuss the race.

In order to win the Tailwind series, I needed to place high at the Big M Resurrection so that my result from Pontiac wouldn’t be taken into account.  I had placed 7th at Pontiac, and my next 4 races in the Tailwind series were all podium finishes; since the final standings are determined by your top 5 races, Big M would displace Pontiac if I finished higher than 7th.  So there’s that.

Apparently not many people wanted to make the drive up to Manistee for the race, and we only had 6 people in the sport SS class, including Brandon Karbum, Colin Holsinger, and Pam Bufe. Jeff Gilbert was also racing sport SS, although he usually races elite/expert in the MMBA series – USAC requires a license to race elite/expert in the Tailwind series, and Jeff justifiably did not want to pay for a license to race for one day.  I had raced against Jeff a few times before, and was anxious to see how I’d do against him with a bit more experience.

Soon after we hit the trail, it became clear to me that this race was going to be won by either myself or Jeff.  We decided to work together early on in the race, and had outpaced the rest of the field by about mile 3.  About a half-mile from the end of the course, there was a huge sketchy downhill with lots of sand – during the first lap, I (being my usual, tentative self) 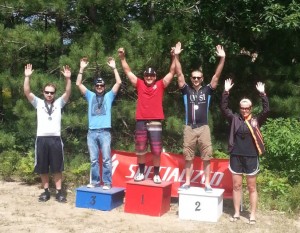 carefully descended this section at a snail’s pace, burning up my brakes the entire time.  Jeff led during the second lap, and bombed the descent with maniacal (although oddly controlled) abandon, gaining about 20 seconds on me on that section alone.  I caught up with him about a mile into our third lap, and he was fading a bit during the climbs.  Knowing that my only chance to beat him would be to put some distance between us before that final downhill, I passed him with about 4 miles to go and increased my tempo.  I thought I had him about two miles before the finish as I couldn’t see/hear him behind me, but apparently I didn’t go hard enough, as he caught up to me as the intensity of the climbs faded right before the final descent.  Since I didn’t really need the win to clinch the series, and also because I wanted to respect the fact that he was clearly faster on that section, I let him by.  We finished about 18 seconds apart for first and second.

Although there was one race left in the Tailwind series at this point, I had locked down the series win by placing 2nd at Big M.  And since the Tailwind series also counts as the USAC state championship series, I received a state champion medal for the sport/beginner SS category.  I had no expectations about this series at the beginning of the season (since I didn’t really plan on competing in it), and I’m extremely happy with the result.

The 2012 Addison Oaks Fall Classic was my first mountain bike race ever, so I was looking forward to competing there again with a full season of racing under my belt.  On top of that, the points competition in the MMBA series was tight, and I needed to beat Talon Tramper and Byrne Johnson here in order to secure 2nd place in the series.  Furthermore, Addison Oaks is a very fast, hardpacked course, with lots of passing opportunities.  There were numerous factors making this race an exciting one.

I rode the course the night before, relatively close to dark and just after it had rained.  I was running my standard Fort Custer gearing of 38 x 18, which felt good, but I decided to make my gear a bit heavier for race day based on the amount of two-track on the course.  This ended up not being the greatest choice, because I believe I over-estimated the two-track; also, there isn’t a ton of climbing on the course, but you do spend the majority of the race on pitchy singletrack, where my larger gear wouldn’t help me much.  Anyhow.

Aside from Byrne and Talon, a number of Tailwind series racers showed up including Tim Fargo and Brandon Karbum.  Also present was my friend Mike Tuomi, who had been racing geared this year but set up his SS for this race.  The 2012 Addison race had also been his first race, and he and I had placed 7th and 8th last year, respectively.  His results in geared had been very good this year, so it was great to be racing against him again.

I took the holeshot from the start and led a 6-person paceline of Mike, Tim, Brandon, Talon, and Byrne for about 2 miles.  Now, I’m not sure exactly when this happened, but Byrne crashed during the first lap by hitting a rock on a quick uphill turn that taco’d his front rim, bent both his top and bottom tubes, and tore up his forearms.  Fortunately he was alright aside from some trail rash, but his poor bike… I feel for you, Byrne.  (aside: this would be the first of many crashes on the day)  About 3 or 4 miles into the trail, right after some not particularly technical rock gardens, I went over the bars after hitting who-knows-what with my front wheel.  Honestly, I may not have hit anything.  Ghost rocks, maybe.  Tim and Mike went by me.  I got up and tore after them, burning up quite a bit of energy.  I was bleeding a bit from my knee as well, but it didn’t seem too bad.  And my bike was ok, which is the most important thing, right?  I caught and passed them again on the longest section of two-track, and we rode together for most of the first lap.  At one point Tim washed out and fell behind, so Mike and I finished the lap together.  Now, I’m not sure where Talon came from, but he and Mike led the second lap.  My knee was starting to stiffen up from the fall, and I was having a bit of trouble pushing my gear to keep up with them.  About a mile from the end of the second lap, Talon went over a little rock/log feature and completely blew out his front tire.  He went over the bars in front of me and into a small group of trees.  It was a dangerous-looking fall, but fortunately he was ok.  But, like Byrne, his bike was not ok, and he could not finish.  He had been riding really strong too, and it would have been a great battle on the 3rd lap.  As it was, Mike and I finished the second lap, and he put the hammer down hard.  I don’t know whether it was my gearing or the fall that had sapped my energy (probably a combination), but I had nothing to keep pace with him.  It ended up being his fastest lap of the day and my slowest, so we finished for first and second; Tim Fargo ended up with 3rd.  Aside from the carnage, it was a great race.  The folks who organize Addison do a great job, and there’s free food and beer for the racers afterwards.  And Addison is a beautiful park. 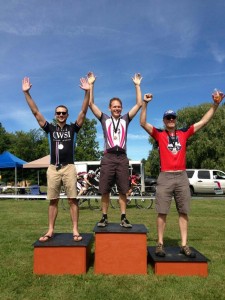 By placing 2nd at Addison, I secured 2nd place in the MMBA CPS, which I’m very happy with.  There’s one more race in the series at Pando in a few weeks, and I’ll be moving up to expert/elite SS.  6 laps of hill repeats against some of the fastest dudes in the state.  Should be a blast!