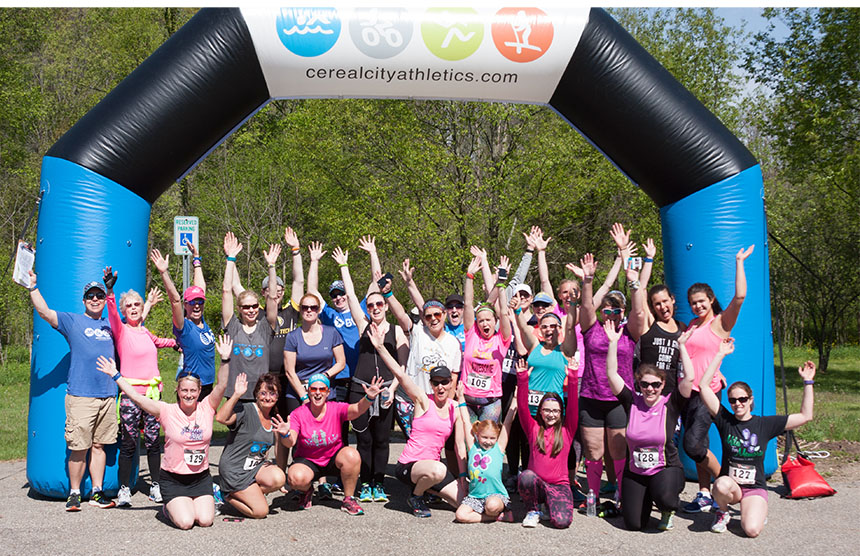 Saturday, May 13, women took to the trails and streets of Battle Creek for the first all women’s duathlon in the area. The Women Who Du, presented by Cereal City Athletics, focused on women showcasing their strength, passion and commitment,  and was a great first year event, complete with an oatmeal and yogurt bar AND a spread of chocolate goodies at the finish. The event intentionally took place over Mother’s Day weekend and encouraged mothers and daughters to participate together.

WSI riders Katie and Holly participated in the event.

For Holly, it was her first duathlon. She was up for the challenge, although she usually avoids duathlons like the plague because of the double run!  Being a road runner, the trail run was challenging but gorgeous. The first run was 1.3 miles, but it was so much fun she decided to extend it to 2 (read: wrong turn). The first run was followed by a 9 mile bike and ended with 5k run. This event was created as an event to introduce more women to multisport events and it did just that. It was an accessible event for all levels and drew women with a variety of backgrounds and a fair amount of newbies. Can’t wait for next year!

Katie felt like she was on home turf, being a frequent runner of the trails at Woodland Nature Preserve. She loves the uniqueness in the trails constantly changing from hard wood chips to dirt to rolling prairie and back. The bike course was quite hilly, which she had somehow forgotten until back on it tackling the hills. The finish line food spread and chocolate was much appreciated.

Photography for the event was provided by Stephanie Parshall Photography.