Held at the Binder Park Golf Course in Battle Creek, MI, the 2017 Fat Fest Relays was the first race for me of the season. While I’d been on the fat bike several times over the winter enjoying an entirely new type of riding, this would be the maiden “race voyage” for me. I was excited that teammates Dwight Denisiuk and Katie Bridges also decided to get out and race, so WSI Cycling had a good showing for the day.The event was organized by the fine folks from Cereal City Athletics, who put on a variety of great cycling and adventure events throughout the Battle Creek area. If you’re looking for some fun this year, be sure to check out their site!

First up for the day were the relays. Teams of riders took turns completing the course over multiple laps with the lowest combined time taking home the award for first place. Following the relays was the one-hour solo event. That’s what I signed up for.

Similar to a crit, cyclocross, or any other timed bicycling race, the format was pretty simple. Go out and ride the course as many times as you can in the allotted time (60 minutes). While I had not been riding much, I felt pretty good and knew if nothing else it would be a great training ride for me. 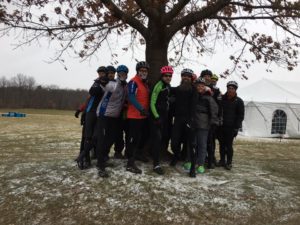 We started off Le Mans style, meaning that everyone set their bikes down and had to have a hand on “the big tree” about 50 yards away (then run, get your bike and start pedaling). The horn went off, everyone started running (yes, in cycling shoes) and the race was off. I managed to get a great transition had placed my bike in a good spot, so I was up and pedaling quickly. I started the race in 2nd or 3rd position where I managed to stay for most of the next 60+ minutes.

While we were supposed to be riding on snow (this was a fat bike race, after all), the weather turned prior to the event and the trail didn’t have any snow on it whatsoever (at least when we started). There were some slippery spots and a pretty tricky off-camber uphill left turn that made for some interesting bike handling. Fortunately, I was able to find the “perfect line” by the second of my seven laps and was able to keep it a secret for most of the race. 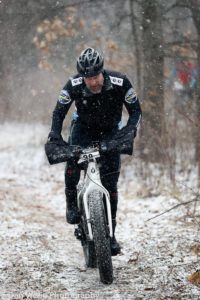 Having teammates Kathy Roche-Wallace (she seemed to be all over that course) cheering me on and Danny Wolin taking awesome photos (credit for all the riding pics) for the team was a real motivator. From the start, I put the hammer down and spent the entire hour pedaling about as hard as I could, knowing to keep it just below redline until the very end, for fear of getting leg cramps.

Jay Bridgeman from Custer Cyclery, who was riding really strong, flatted early in the race, so that took him out of contention. And, with the exception of a few “youngsters” that snuck by me (but I caught them eventually) I was in the fat bike lead. Yes, there was one cyclocross bike out there, who none of us fat bikes were going to catch. So, if I could hang on I was looking at 2nd place (or, 1st fat bike). “Keep your head down and pedal,” I kept telling myself.

By now the snow had been coming down for the past few laps, making things interesting (but somewhat necessary, in my opinion – it was a fat bike race after all). Coming into what “could” be my last lap I noticed that David Walters from KTM Midwest was slowing starting to make ground on me. As luck would have it, he got close enough to see my “secret line” on the off-camber left turn and took it, saving him enough time and energy where he ended up catching me just before the start/finish line. We came across and saw that the clock was at 58 minutes, so we were off on what would be our last lap (and I was starting to get gassed).

While I tried my hardest to catch him, that simply was not to be. The legs just didn’t have anything left to go any faster, but I did manage to keep a few other riders that were nipping at my heels on the final lap at bay. I had enough in the tank to come across the finish close enough to see David finish, so at least I was close. Ended up 2nd place (yes, for fat bikes) and was pleased to make the podium for my first race of the season.