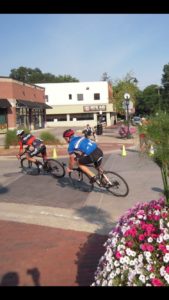 I decided that the BTR Criterium in Kalamazoo was going to be my first ever bike race. It was an absolutely amazing experience! For being relatively new to cycling I hadn’t put much thought into bike racing until Maggie (my very supportive girlfriend) encouraged me to try bike racing.

I was somewhat nervous going into the race, but overall I was very excited. Scott Bridges was really generous in offering tips and tricks to doing well in my first bike race. He told me to try and stay at the front and see if I had anything left for the sprint. I did stay mostly in the front for most of the race until the bell lap came around. Unfortunately, I made a rookie mistake and found myself in the lead position a little too early. Overall, it was a great experience, and bike racing is definitely something I will continue to pursue. 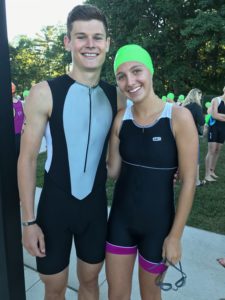 The 2017 Cereal City Triathlon was my fourth ever triathlon. I was really looking forward to competing because I had put a lot more time into training for it. The swim went alright I guess, not as good as I hoped I was going to do. I was really counting on my bike to pull me up toward the front of the field, and fortunately, it did. Though it wasn’t my best bike split, I still made up the ground I lost on the swim. The run was where I was really hoping to reel in whoever was in front of me. I was happy to have my best ever run split and finish first overall! It was so awesome to be the overall winner, right beside Maggie, who was the overall winner for the women. Shoutout to Cereal City Athletics and everyone involved in putting this event on because it was absolutely great! 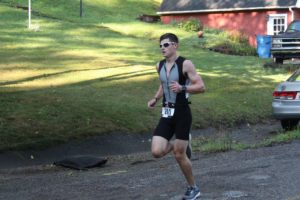 I wasn’t planning on competing in the Shermanator Triathlon prior to talking to Jason Moore at the Cereal City Tri. I was on the fence about competing, but with the support of the Moore’s, Bandeen’s, and Elder’s, I was able to compete at the Shermanator. It was my first time doing this triathlon, so I was eager to see different competition. The swim went just about the same as the Cereal City Tri, which was decent but not great. I was really hoping for a better bike than I had at Cereal City, but it was pretty much the same result. But, the run is where I improved as it only ended up being about 2.99 miles instead of 3.1, but I was on pace for a much faster run compared to Cereal City. I was very happy with third overall, as the two men who beat me were very talented.

I was excited to do another criterium to hopefully redeem myself a little bit from the last one. For a Cat 4/5 race, it was very fast, at least compared to what I was used to. I had to work hard in order to stay in the front and the course was pretty technical. Someone wiped out right behind me and luckily I was able to avoid the crash, but it was a wakeup call. I managed to stay in the front and sprinted for a tie for 8th place. I was very happy with how I raced in my second criterium. Another awesome bike race! 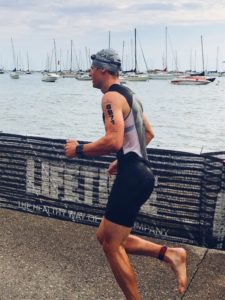 The Transamerica Chicago Triathlon is a HUGE race. I have never been in any sort of athletic event with this many people. I wanted to compete in the Olympic distance triathlon, but registration was full. So, I competed in the sprint with over 2,000 other triathletes. I was looking at previous year’s results and was hoping to finish in the top 5, if not, top 3. The swim was somewhat rough because it was in Lake Michigan right along the coast. After coming out of the swim in an okay time, I had a 450-yard carpet run just to get to the transition area. I had tons of time to recover from the swim and get ready for the 15-mile bike ride. Starting the first half of the bike going pretty hard, I was thinking I was going to have my best ever bike split. Sadly, it was just another okay bike time, so the run is where I had to make up some ground. The run was pretty good because there were tons of people around me. I finished up in fifth place overall, so I achieved my goal! It was such an awesome experience to be in that huge race, and I owe it all to my girlfriend Maggie for making this all happen. My parents paid for it for my birthday and the whole Wood family was so generous in coming to support me. We all had so much fun and I appreciate everyone making this happen!