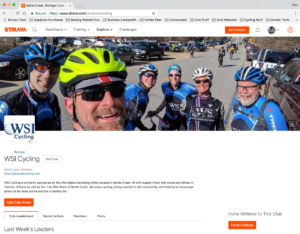 If you ride a bicycle, there’s a good chance that you’re familiar with the site, Strava. Thousands of cyclists from around the world contribute to the site, posting updates from their rides (and other events) for friends to see. It’s a great way to keep in touch with your cycling connections… and make new ones!

We look forward to connecting with you on Strava, but hopefully we’ll get to do some real riding together down the road.

~Keep the rubber side down…  😉

Shayne Thomas here…I’m glad to report that I have done the second race in the HFP Fit Family Series-Maumee Bay Triathlon at the awesome state park of the same name near Toledo Ohio.  Once again doing the sprint triathlon in the age group-fat, old, & ugly.  It was the second time that I placed third in the over 40 over 200lbs.  I was generally satisfied with my times.  I came out of the swim with my buddy and fellow Clydesdale Mark.  We talked about how good a pizza sounded right then as we trotted up to the transition.  Toledo is table top flat.  The only challenge on the bike is wind.  There was a bit, but, not as bad as it has been in the past.  The brutal run is also flat, but, is run in zero shade.  I thought a Guinness sounded pretty good and would quench my thirst, but, realized it would take a special person to drink one during a triathlon.

I literally grabbed my metal and my time slip and trotted off to gather my stuff from the transition.  As quickly as possible I needed to be in Mansfield, Ohio for the Miss Ohio parade to drive my daughter’s float.  She is the reigning Miss Mansfield’s Outstanding Teen.  www.shaylathomas.com.  I got a lot of questions about why I had my weight and age on my calves, unfortunately, they started to cramp halfway through the parade!!

I want to thank WSI Cycling and Team Active for allowing me to join the team. Many of you know me through Eric Cook and our triathlon adventures.  I am an age grouper, viagra  typically racing Master Clydesdale-fat, old, (and ugly).  I usually stick to Olympic and Sprint events in Ohio. I was able to get an age group win at the Cedar Point Sprint Rev this fall-(only because Eric chose to do the half).  Joining the team has given my training new focus.  There are many good cyclist and triathletes in my area, but, no comparable community to what Team Active has been able to build in Battle Creek.

As many of my fellow triathletes do in the winter, I have moved inside.  I ride a Trek Madone, purchased at www.Teamactive.com. shoes and trainer from there as well.  Graciously, my daughter allows me to ride in her ballet studio in our basement.  www.shaylathomas.com.  The only stipulations are that I have to mop up the sweat and use my own Pandora station-usually AC DC. 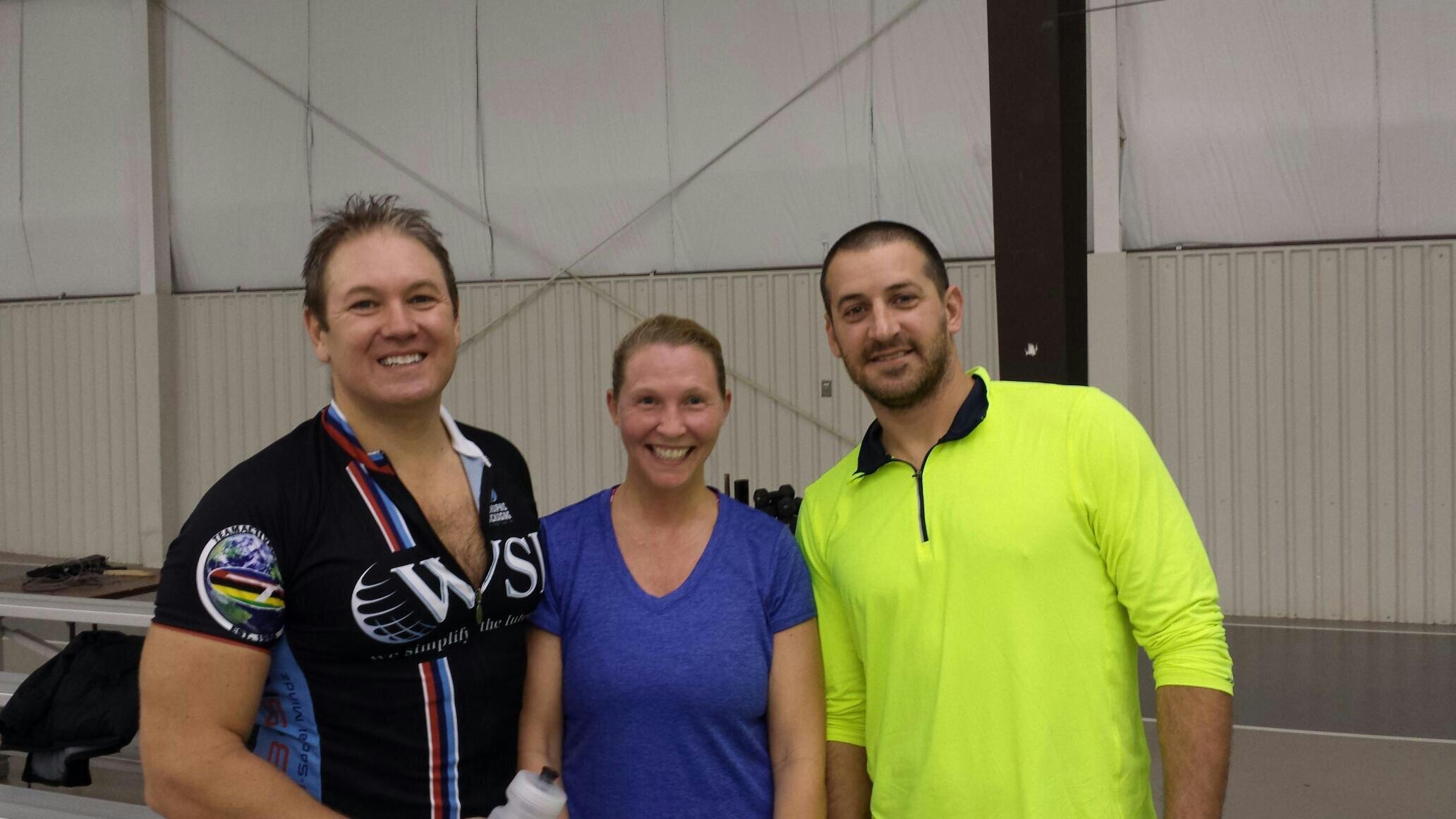 Part of the joy of multisport is helping other athletes get involved.  Twice in 2013 I have strayed from doing an individual event in order to participate on a team. This has served to introduce aspiring athletes to multisport.  For the New York Triathlon I participated on Team Sad Dads as the swimmer.  Jumping into the Hudson for my buddies was worth it, because, one of my teammates has already registered for his first triathlon in 2014!!  This week was my second attempt to get friends turned on to triathlons.  My friend Pam was an accomplished cross country runner and her boyfriend Steve was an All American swimmer. They wanted to attempt a triathlon in 2014, however, were overwhelmed by the thought of the logistics.  I agreed to serve as their cyclist on Team Wolfpack for some local races until they got a feel for multisport.  We did our fist training event at the Tiffin, Ohio YMCA indoor triathlon.  We got a second place finish and are looking forward to a spring team triathlon with fall individuals for each of them.  Happy New Year and may your 2014 race calendar be full of races with friends!! 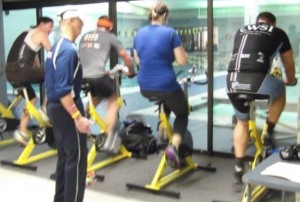 Last Night WSI Team Active Racing got together to kick off  planning for the 2014 Season.  Eric Cook was nice enough to host at his house and, since I was driving from out of town, I convinced 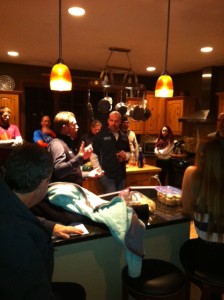 him to go for a ride in advance of the team meeting.

That may not have been the best idea.  Dwight  joined us and is (for some reason) at mid season form and Eric is, well what Eric always is…a machine.  I was a bit late for our departure time after making some much needed purchases at Team Active, although I was dressed and ready to go, my bike still needed to get prepped and I wanted to put toe warmers in my boots and hand warmers in my gloves.  Not sure what the temperature was, I remember seeing about 20 degrees.  While I was prepping my gear, I told Eric and Dwight that I needed about 5 minutes.  Dwight said “Okay, you get all ready, then we will start spinning and warm up on our way to the ‘Dump’.”  I thought he meant, we would have time to warm up, not that we would get on the bike and proceed to ride at 22 mph right out of the driveway!  I got warm, but not much of a warm up.

We met Kathy at an intersection about a mile from the entrance to the Dump.  It was too cold to socialize too much, but very good to see her.  I had not seen her since she returned from RAAM.  The Dump is a great technical morass of cement, tar and tile and, if you go down, something gets scratched or broken.

Last time I rode the Dump was 3 years ago, that was in the middle of the summer and I was much more comfortable handling my bike than this ride when the ground was frozen and I was cold.  Nobody fell, though I did do some sight seeing a couple times, but all in all a great ride through the woods.  On the way home, Dwight pulled and I locked on to his wheel as if my life depended on it.

My feet were so frozen, that they were numb, and (you know the feeling) I wanted to cry they hurt so bad when they started to thaw out.  But then we went to Crazy Horse for some pizza and a beer…then all was good.

All got much better when I saw the team that I started riding with 5 years ago.  Mike, Eric, Kathy, Dan, Danny, Hannah, Devin, Chuck, Charles, Dave, Dave Sr., Eric, Cameron, Dwight, April, Keith, JJ, Groat, Josh, (and I probably forgot a couple guys), have all been around since I started riding.  (JJ brought his daughter with him, it was great to meet her too.)

There is something about the internal fight you have with yourself while you are putting out a big effort (or fighting the elements) and then get together with friends who do the same thing.  It is a fraternity and sorority and a family.  It was great to see everyone, go for a ride and talk about all of the great things coming for 2014.  I value our friendship and look forward to an awesome 2014.  For those who could not make it, we missed you.

Recently, WSI/Team Active Racing racer Kathy Roche-Wallace (www.GoKathyGo.com)  spent the morning at Wattles Elementary School in Battle Creek talking to 1st -4th graders at their Career Day. Kathy talked about being an athlete and her past adventures, including the RAMM (Race Across America), triathlons and adventure races. While the kids certainly thought she was one of the “coolest” guests of the day, she took the opportunity to reinforce the importance of living a healthy lifestyle. 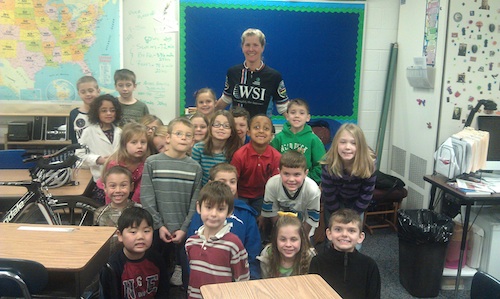 Kathy talked about the benefits of exercise and eating a healthy diet, especially important today with childhood obesity and juvenile diabetes on the rise. “Three’s no way I could compete in the events I do if I didn’t take care of my body, eat right and get lots of rest,” she told the students. “Whether you like to ride your bicycle, play soccer or just take the family dog for a walk, being active is important to staying healthy.”

This year Kathy will be returning to RAMM to defend her title and is one of only a few females registered for the solo event later this June. Starting in California, the route travels across the country over 3,000 miles ending in Maryland and should take her less than 12 days.